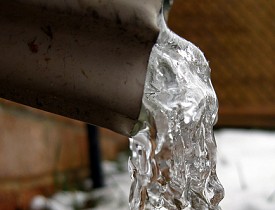 How Cold Does it Have to Be for Pipes to Freeze?

In early December, the temperature in Jacksonville, Fla., hit a record low of 21 degrees Fahrenheit, roughly the temperature that should start to cause concerns about frozen pipes. On the same day in Minneapolis, the low was 8 degrees.

Still, frozen pipes may have been a bigger concern in Jacksonville, where homeowners are less prepared and homes are less likely to be adequately designed for freezing temperatures. Exposed pipes are most vulnerable to freezing. Pipes near exterior walls or in poorly insulated crawl spaces, basements and attics are also likely to freeze.

The Building Research Council at the University of Illinois determined that uninsulated pipes in an unconditioned attic are likely to start freezing at about 20 degrees Fahrenheit, but drafty gaps and cracks can lead to frozen pipes at higher temperatures. The wind chill effects that make temperatures feel colder also contribute to freezing pipes, according to University of Illinois researchers.

It takes a few simple upgrades and some common sense to keep pipes from bursting and causing expensive headaches, particularly in climates where freezing temperatures are rare but possible. To help prevent burst pipes, drain or insulate plumbing, reduce water pressure and minimize exposure to the elements. Carefully thaw frozen pipes, and be prepared so you can minimize damage if frozen pipes burst.

Interior pipes are often overlooked, but the pipes to your kitchen sink are likely among the most vulnerable, as they are closest to an exposed exterior wall. Keep cabinet doors open during cold snaps to avoid freezing these pipes.

If you are going to be away during a cold snap, you might be tempted to turn off the heat to save some money on utility bills. However, the plumbing bill after a frozen pipe will more than offset any potential savings. Instead, turn down the heat to save some energy but leave it above 55 degrees.

Consider asking a neighbor to check on your house regularly while you are away to make sure the power or fuel supply didn’t shut off and leave your house vulnerable to freezing.

Frozen pipes typically burst because excessive water pressure builds up between the faucet and a chunk of ice in the pipe. A slow drip will relieve this pressure.

Remember that water only has to freeze once to burst a pipe. In any area subject to even occasional freezing temperatures, protect pipes from freezing, minimize pressure in cold pipes and thaw frozen pipes before they burst.