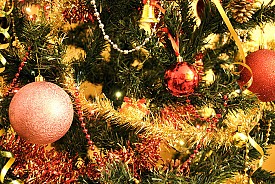 My last name is the German equivalent of Smith. I love German beer and German food. And I drive an Audi (an old Audi). But it would be wrong to characterize me as a Germanophile. In fact, I had to look up that word to confirm it really exists. The point I'm making is that I am an unbiased source and do not assume everything made in Germany is vastly superior in some way to its non-German counterparts (although it's no secret that German designers and manufacturers have few peers). That's why you can trust me when I say that the Krinner Christmas tree stand is one of the greatest household innovations of our time, and arguably among the best holiday gadgets of all time. Oh, Tannenbaum.

The Krinner Christmas tree stand is more than just a better mousetrap; it stands alone. To understand why, let's look at the shortcomings of traditional stands:

Most are made of cheap, rolled sheet metal and weigh just a few pounds; that may be nice for storage, but it's not so good for stability. To set up the tree, you stick it into the stand (if it fits) and have a helper hold it reasonably plumb while you slither on your belly to get under the lowest boughs. Then you engage your core in a painfully awkward way while turning the stand's four eyebolts to drive them into the trunk. This process is absurdly slow, as the bolts have fine threads and you have to get all four equally tight on a irregular trunk surface. When you're finally done and you stand up (sweaty because you're still wearing your parka), the other tree-positioning experts in the room conclude that it needs to turn about 27.3 degrees to the left. Once rotated, the tree has a slight but completely unacceptable lean to it. Back down on your belly, loosening bolts on one side, tightening on the other…You know the drill.

Here's how it works with the Krinner: You set the trunk into the stand, then pump a foot pedal several times to secure the tree -- all from an upright position. If the tree needs adjustment, release the pedal mechanism, move the tree, then pump the pedal again. Once you're satisfied, you engage a little switch on the pedal to lock it in place and prevent accidental release of the mechanism. The pedal is superbly convenient and makes it easy to apply a lot of force on the trunk, but the real genius of the stand is in the clamping mechanism: Pumping the pedal tightens a cable that pulls five clamping fingers around the tree's trunk.

Because each finger moves independently and the cable applies equal pressure to all of them, the system securely anchors trunks of almost any shape and an uncommonly wide range of sizes -- from 1 to 7 inches in diameter. When it's time to remove the tree, simply release the lock and the spring-loaded fingers snap open. On the jumbo model we tested this release action is a little alarming when you first do it (more like a bear trap than a mousetrap) but you have to like the heavy-duty materials.

The Krinner Christmas tree stand we tested is the Genie XXL. My father-in-law bought it last Christmas after years of fighting with inferior (but relatively heavy-duty) stands. You can already guess whose job it is to help said father-in-law put up the tree every year.

To fully appreciate why I like this tree stand so much, you have to understand a couple of things: 1) the size of our tree. When my father-in-law shows up at the garden center to pick out his specimen, the Denver landscapers there see their Christmas bonuses get a little bit plumper. (He's the kind of shopper who looks at a "good, better, best" range of options and sees only one possibility. Even so, he's just as likely to ask, "What else you got?") 2) I'm 5 ft. 8 and just shy of 140 pounds. My father-in-law is slightly shorter. When setting up our usual monstrous tower of timber and boughs, we look like a couple of scrappy elves wrestling a drugged grizzly bear. It's quite an event, typically involving plenty of muttered curses, plus a few silent prayers that the tree critics in the room will let well enough alone.

But that was with the old tree stands. The Krinner's debut performance was no less spectacular than Rudolph's first night out. Technically we exceeded the stand's load limits, as the tree was every bit of 12 feet, and we had to deploy our DIY carpentry skills to fit the (normally ample) maximum of a 7-inch diameter. The stand had no trouble supporting the tree, and the setup time and effort were a fraction of what they usually are (this time, our curses were due not to frustration but rather amazement at how well the stand works; by the way, we set up well before Christmas, so it's still OK to curse). That gave us more time for decorating!

The Krinner Genie XXL stand weighs 18 pounds (dry) and holds 2.5 gallons of water. This translates to greater stability than with other stands, plus less watering. A lot less watering. The stand takes about 20 minutes to fill (if it weren't the dead of winter, I'd save trips to the sink by using a garden hose), but once it's done, you don't have check the level every 8 or 10 hours, like you do with a regular stand. The Krinner also includes a water level indicator, a corklike plastic float that juts through the top of the stand base. This is a handy feature, but ours hung up once, so I recommend pushing the float down once or twice and letting it float back up just to make sure it's not stuck.

Currently Krinner also offers a smaller but very similar stand, the "L" model, rated for a 7-inch trunk and a maximum tree height of 8 feet. This one includes a 3 year warranty, while the XXL comes with a 5-year. At about $100 for the larger model, the Krinner clearly is a high-end Christmas tree stand, but it's well worth it. And it's still a lot cheaper than an Audi.

Paving My Driveway Was An Easy And Pleasant Experience