Just Say No to Drafts in the Home 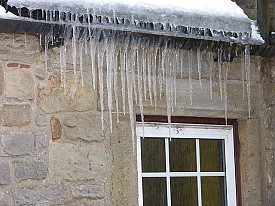 Do the candles on your table gutter in a steady breeze, even though none of the windows are open? Can you see tumbleweeds drifting across the hall? Are your drapes swinging ethereally? Your house might be haunted...but it's probably just drafty, and that's going to drive your heating bills way up, way fast. It's time to say goodbye to drafts for 2014, because you deserve better than eight layers of blankets and chattering teeth every time the mercury drops.

If you have a draft problem in your house, chances are you have a rough idea of where the problem's originating, but take a closer look. Common culprits are doors and windows, both of which tend to expand and contract (along with their frames) when temperature and humidity levels change. Over time, that can lead to permanent warping, which creates openings for cold air to come howling in. Inside the house, it's common for drafts to creep in under doors, making it hard to control the temperature from room to room.

Poorly insulated homes can develop drafts from small openings to the inside courtesy of worn siding and roofing (another good reason to have your roof inspected and consider adding attic insulation if you haven't done so already). Another possible source is your chimney, which isn't supposed to let cold air in, but might be doing just that if it's not properly maintained or you're leaving the flue wide open.

At Grist, Umbra notes that electrical receptacles, plates, and switches can be another source of drafts, as can vents. If you live in an area where you need air conditioning in the summer and you use a window-mounted unit, that's another potential source of problems, as air may be leaking in around improper seals.

Windows and doors are a good first line of attack for handling drafts. Add weather stripping to further insulate them, and consider using heavy curtains on windows to limit both drafts and heat loss through the windows themselves. You can also add draft catchers to the bottoms of your doors: fill an old sock or a simple fabric tube with beans, rice, or some other stuffing material and run it along the bottom of the door. This will block gusts of cold air and help you stabilize the interior temperature.

If you haven't had your chimney inspected in a while, get on it, and make sure the flue is in good shape. Confirm that everyone in the household knows how to use the stove or fireplace, which will reduce the risk of fires in addition to encouraging everyone to avoid drafts by using your heating source properly. If the problem lies in your electrical system, low-cost foam insulation kits are available and they allow you to quickly seal up drafts around your electrical outlets as well as vents.

If that New York air conditioning unit is letting in gusts of cold air, take it out of the window and store it for winter, if you have the room. (This is also a great time for cleaning the unit and going over it to make sure it's in good shape.) If this isn't feasible, check around the edges for gaps, and consider buying an insulating cover to prevent heat loss through the unit.

Be vigilant about drafts. Cracks in your home can represent a major source of heat loss, and they are a big contributor to heating bills. They can also be a sign of a more serious problem; for example, if you have drafts coming up through your floors, you may have an issue with the subfloor that needs to be addressed!