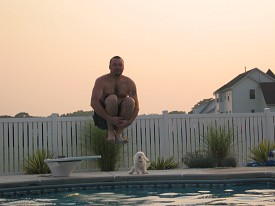 Fishermen are often the first line of defense when it comes to invasive aquatic species, because their daily hauls create a sort of ongoing survey of what's going on in the water. Bycatch, the species that aren't commercially valuable, is often exactly what marine biologists and scientific researchers want to take a look at.

In Sweden, a particularly unhappy discovery was made recently with the finding of a pacu, an invasive species originally found in South America. This pirahna relative isn't quite as notorious as its more well-known cousin, but its teeth can pack a bite, and they tend to prefer men when they're looking for a snack. While a bite from a pacu won't kill, it certainly wouldn't be comfortable, and that's why Swedish authorities issued a swimming warning.

Swedes are famous for enjoying the waters of their beautiful coastline, especially during the summer months, when the long days make lots of time for swimming. An invasive fish species that attacks people isn't exactly what Swedish swimmers want to encounter, and it isn't terribly good for tourism either.

While the pacu isn't quite as aggressive as advertised, it's definitely a worry. Fortunately for Swedish swimmers and authorities, it appears that it may have been an isolated incident, as no additional fish have been recovered. That's good news for invasive species control, but it raises some important larger questions as the world gets smaller and numerous species make their way across the globe to new homes in which they can potentially flourish, often at the expensive of natives.

How did the fish get there? Authorities suspect a release, accidental or intentional, by a fish dealer, although it's possible a private fish fancier might have decided to discard the fish, mistakenly releasing it into a waterway in the belief that this was a humane option. If more than one pacu had been found, what would have been the best approach to dealing with the situation? Humane pest control is ideally the best choice, especially in progressive Scandinavia, but with species that can quickly take over, it might not always be feasible to come up with humane options such as using birth control.

One option that's worked well for invasives in the US is encouraging people to eat them, which not only reduces the numbers of invasives in the environment, but also raises awareness about the issue. Such campaigns encourage people to think twice about keeping invasive species as pets, and to use discretion when deciding they don't want their exotic animals any more: for those living near wetlands and other sensitive sites, release into the wild is never a good idea.

A secure modern aquarium or pond with plenty of room to maintain a healthy, happy fish is the way to go if people want to keep exotics, and in the event an animal can't be kept anymore, options can be discussed with the dealer. Another option can be to contact an animal welfare group, fish fancier's association, or club associated with a given species to see if a member might be interested in acquiring a new friend.

While Sweden's waters are probably safe, for now, it's not the only region dealing with invasive species; In Florida, Miami fencing contractors are working with residents to keep invasive species out of their yards and away from their pets, for example, and plumbers in many cities caution against the disposal of deceased or unwanted fish down the plumbing for hygiene, public safety, and plumbing integrity reasons.