How to Prevent Pavement Ants 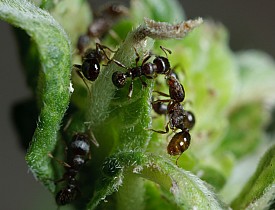 Pavement ants are common house infesting ants found on the East coast, the Midwest, the South, and parts of the West coast. They are black-brown ants that love to feed on morsels of human food, especially sweets and greasy stuff. Their name comes from their practice of burrowing under pavement or driveways, and making piles of dirt on top of the pavement over their nests. They're not known to nest inside of houses; rather they prefer to nest outdoors, under pavement, rocks, boards, and bricks.

Essentially, pavement ants are just regular ants. They're annoying to have in the house (I don't know anyone who like having ants crawl all over his kitchen), but they're not as horrible as, like, termites. If you don't want to see these little critters around your house, there are a few precautions you can take.

Second, keep the kitchen clean. Pavement ants are attracted to morsels of food, even the food left on dirty dishes. If something sticky and sweet spills, clean it up right away. Basic cleanliness is one of the best ways to prevent pavement ants from infesting your kitchen.

Third, caulk openings to your house. Ants enter your house just like other pests do, by entering through small cracks and holes. Seal up your foundation. Make sure that doors close snugly, and that there are no open cracks around window frames.

If you notice pavement ants in your house, ant traps are more commonly used than indoor sprays. Use ant traps as directed.

These few steps should keep your house relatively free of pavement ants. Though it's almost impossible to never, ever see a stray ant indoors, it is possible to reduce infestations.