How to Choose a New Stove and Oven 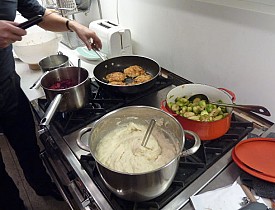 “Considerations when picking out a new stove often have to do with whether you are buying one for the first time or not,” said Josh Gralenski, assistant sales manager for Central Appliance in Greenfield, MA. “If you’ve purchased a stove before, you often have a better idea of what you might be looking for,” he said. Gralenski said that people buying their first stove “especially in this economy,” tend to just go for the least expensive model available.

Gralenski said that naturally, you need to know what your apartment or house will support, gas (natural or propane), or electric. Some homes, such as mine, are set up to support either. In fact, Gralenski discussed a newer model stove that has a gas cook top and an electric oven. “People like being able to control the flame on a gas stove and have the typically more even baking results of an electric oven. A dual model stove gives you the best of both worlds,” he said.

If you are purchasing a stove for the first time, the most basic consideration is the size, so that it will fit properly in your kitchen. Gralenski said that most standard stoves are 30” wide, but that there are models as small as 26 inches and as wide as 48 inches. Have your kitchen remodeler measure your space before you order a new stove.

The next thing to consider, Gralenski said, is your cooking style. Do you just want a cook top if you aren’t interested in baking? Do you want or need two, four, or five burners? Number of burners will depend on how many people you routinely cook for, foods you like to cook or bake, or if you enjoy canning foods.

Gralenski described some new models. One has a griddle surface incorporated in the cook top. “It’s sort of like a fifth burner. It allows you to cook things like bacon or pancakes more easily,” said Gralenski. Another newer model is an improvement on older gas stoves in that it has larger, more recessed burners that allow you to move heavy pots from burner to burner more easily. “This type of stove is good, for example, for when you have to move that big pot of boiling water for spaghetti,” said Gralenski.

Electric stoves come in two types, coil or radiant. Gralenski said that the advantages of radiant stoves, which have flat, glass cook tops, include ease of cleaning. “You have a flat surface you can easily wipe off – it just looks cleaner, and you don’t have to deal with drip pans,” he said. However, if you are a fan of canning, or you typically use cast-iron cookware, a radiant cook top is not your best choice. Gralenski said that radiant cook tops often can’t withstand the weight of heavy pots and pans. “The weight, plus the intense heat needed for canning will sometimes crack a radiant cook top,” he said, adding that cast-iron cookware tends to scratch glass radiant cook tops. “It’s the grittiness of the cookware that causes the scratching,” he said.

If you love to bake, you may want to have a convection oven. Gralenski said that convection ovens have a fan installed inside that “creates a sort of hurricane in your oven. Convection ovens cook your food thirty to forty percent faster, which is a great feature for holiday cooking or any time you have a lot of people over for a gathering. It’s a great way to max out the use of your stove.”