We Tested It: Fruitcake 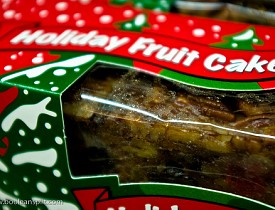 When I was a kid, every holiday season my father received a fruitcake as a gift from one of his accounts in the cardboard box business. The cake always sat in its familiar quaint packaging on the kitchen counter, and we children had unrestricted access. But this was a fool's paradise: Every year, you'd help yourself to a nice thick slice. You might even doctor it with a brief warming in the toaster and a thick blanket of butter (unorthodox, I know). And every year, as you bit into the dense, gummy bread full of atomic-green and candy-red fruit bits, the taste experience made it perfectly clear, yet again, that someone was playing a cruel trick on you.

Now, as an adult and a food lover, I know that fruitcake and its many variations have a long and legitimate history, reportedly dating back to Ancient Rome. (And indeed some fruitcakes today taste like actual 5th century B.C. originals.) I also believe that fruitcake, like liver and onions or pungent cheese, is an acquired taste. Admittedly, it's a taste that I'm still in the process of acquiring.

But that makes me a fair judge of fruitcake for the majority of eaters out there, because frankly, most people could take it or leave it and usually choose the latter. So this year, I tested three varieties of fruitcake to see which was the tastiest. Here are my oh-so-scientific findings.

Weighing in at 3.49 pounds, this heavyweight contender lives up to its name in a few ways: It's Costco-sized and Costco-priced (just under $15), and it's pretty traditional. Or maybe a better term is conventional. Actually, I think mediocre says it best. Chockful of cherries, pineapple, walnuts and pecans, this is bound to be a crowd pleaser among the pathologically sweet-toothed. The cake is imbued with a super-sweet paste that makes it quite moist, but the flour seems to be little more than a binder for the sugary parts. And the glacé cherries are dyed in Soylent green and ruby red hues, with an overdone sweetness that makes maraschinos seem fresh from the tree. But if you like a heavy, sugary fruitcake, this could be worth a try. It also has an abundant chunkiness that might look nice in a large holiday spread.

You may or may not have Safeway stores in your town, but there's a good chance your local supermarket chain might carry this same "no name" fruit cake. Therefore, consider yourself warned. I'm an adventurous eater, and I don't say this often, but I feel it's my responsibility to report that this little rectangular loaf of holiday fare is truly inedible. The ingredients list includes much of the usual stuff, like pineapple, walnuts, cherries and raisins, yet nothing in here tastes remotely like it does in nature. The combination gives you the feeling that this is what "American" desserts would taste like if they were made in an unregulated Asian toy factory. And it smells only slightly less chemical than it tastes.

This may be the world's most literal interpretation of the fruitcake concept. It's a little nutty cake (actual cake, not solidified corn syrup) topped with a Carmen Miranda load of real fruit. My first thin slice from of this diminutive loaf contained a whole date, a large piece of candied pineapple, a few cranberries, a couple of raisins (both dark and golden), a bit of papaya and enough currants to populate a small scone. No glacéd cherries, no corn syrup and no "polyglycerol esters of fatty acids," which both of the other cakes had. But the best thing about the Whole Foods version is that the fruit actually tastes like fruit. Sugary fruit, for sure, but this, after all, a dessert.

Who Takes the Cake?

In case you couldn't tell, the Whole Foods cake was my favorite by far. And don't think that I need my fruitcake to taste like it's healthful; I just need it to taste like food. I would recommend the "Mini Fruitcake" to anyone who wants only a little taste of this holiday tradition or a different take on the old familiar recipes. And if you're not ready for the full fruitcake experience, I recommend trying Stollen bread from a good European bakery. It's dense, buttery, lightly sweet and dotted with just enough dried fruit to make it Christmassy. In fact, it's exactly what I wished that awful fruitcake tasted like when I was a kid.