Do I Need A Plumber To Replace A Toilet? 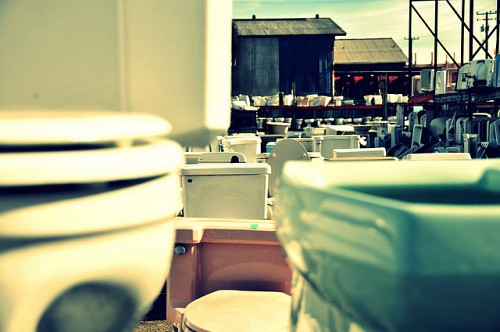 Maybe your toilet is pea-soup-green plastic, and roughly two decades overdue for a makeover. Or perhaps you’ve had an accident and cracked the fixture, or sprung a leak at the base. It’s possible that the toilet’s just completely backed up, and the only way to access the blockage is literally to remove the entire thing. Whatever the reason, if you’re facing this sort of situation, you’re probably asking yourself: “Do I need a plumber to replace a toilet?”

I know that question all too well. I’ve asked myself that very question, when my husband and I were DIY remodeling our very first bathroom. We were laying penny tiles on the bathroom floor, and we had to lift the toilet to tile underneath. We were young and poor and looking to save as much as we could, so when my husband cautiously asked, “Um, do I need a plumber to replace a toilet?” I threw caution to the wind and called upon my hubris: “No way man, we can totally do that ourselves!”

Why the smoke detector shorted out

It was just a few weeks later when the downstairs smoke detector began to sputter and sizzle, shrieking its shrill alarm before promptly shorting out with a final puff of electric smoke. Whoops.

As it turns out, the detector was on the ground floor ceiling, directly under -- can you guess it? -- the second floor bathroom we’d recently remodeled. And that toilet, that toilet we didn’t need a plumber to replace? Well, it was leaking. So, in the end, we did hire a plumber ... to fix the leak.

What you should really be asking

So I feel like I can speak with some authority on this one. If you’re asking yourself, “Do I need a plumber to replace a toilet?”, then you’re simply asking the wrong question. Because what you should really be asking is, “Am I actually qualified to replace a toilet myself?” And that depends entirely on you.

In general, removing a toilet seems pretty straightforward. It’s a simple linear progression of steps: siphoning out the water, disconnecting the line, unbolting the base, removing the tank, removing the seat, and finally, lifting out the base. Installing a replacement toilet is essentially the same process, in reverse: preparing and cleaning the space, placing a new wax ring, setting the new toilet and sealing the ring, attaching the nuts, washers, bolts, and bolt caps, securing the tank and valve assembly, adding the toilet seat, and finally, turning the water back on. Voila!

When something goes wrong

Seems easy enough, right? Well, yes, as long as nothing goes wrong. But anytime you’re dealing with pipes and water and large heavy ceramic oddly-shaped objects, you’ve got to expect that something may go wrong. In our case, the wax ring mold was replaced incorrectly and didn’t make a complete seal, resulting in the tiniest trickle of a leak. We only discovered the leak because of the smoke alarm, and if that alarm hadn’t been there, who knows how long we might have been draining water into our walls and ceiling. It could have become an incredibly costly, not to mention messy, repair.

Is DIY replacement worth it?

A toilet, the fixture itself, is relatively cheap. But labor is pricey, and replacing a toilet can become an expensive endeavor if you’re paying someone else to do it. On the other hand, doing it on your own and accidentally doing it wrong can end up costing even more. It’s a risk-benefit analysis you’ve got to run for yourself, depending on your own finances and your personal familiarity with plumbing and DIY home repair. Is it worth it? Only you can say for sure, but whatever you decide -- good luck!