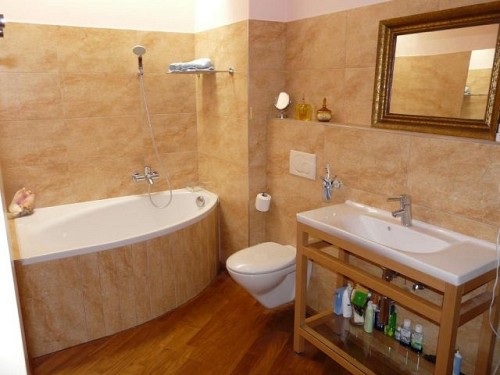 Have you noticed lately that water drips from the bathroom exhaust fan or the joint around it? Don’t panic: there could be a lot of reasons, along with several easy fixes. For some, you might need a handyman or ductwork specialist, but others are simple enough to DIY with a little ingenuity.

Condensation in the duct. You may find dripping water during or shortly after a shower. Many people notice the issue when the bathroom exhaust fan starts dripping on their head as they step out after a shower. The usual cause is condensation inside the duct. In winter, when the warm moist air from the bathroom hits cool air in the attic or outdoors, it condenses, sending drips back down the ductwork. In summer, humid outside air condensed on a pipe cooled with air conditioning will drip when humid bathroom air adds to the moisture level.

Water from the roof. Another potential source is a buildup of ice on the roof in winter, which may melt in reaction to the warm air from the bathroom. It’s also possible that the vapor barrier installed in the roof is developing condensation as a result of poor insulation, and the water is pooling. It may take the path of least resistance, dripping along ducts and soffits because they provide a way into the house.

Check the damper. First inspect the damper on the outside. If water drips from the bathroom exhaust fan, the damper that normally controls the flow of air through the pipe may not be working correctly. It should open only under pressure from the warm air to let it out, and remain closed the rest of the time. If it doesn’t, or it appears to have an imperfect seal, it’s time to replace the damper flap, a task you can do yourself with basic tools.

Insulate. Another option to control water drips is insulation on the ventilation pipe. If it’s uninsulated, wrap it in insulation to control the temperature more effectively and prevent condensation. You might also want to consider evaluating your roof insulation, if the pipe goes through the roof, to determine whether it’s effective enough; if your attic is routinely pretty chilly, the condensation problem may persist.

Replace or reposition fan. You may have a fan that’s too weak for the job. If your bathroom is large or you have a big family that likes hot showers, you’ll need a fan with more power to successfully pull warm moist air out of the bathroom. You might need to hire a handyman to install a more powerful fan, and if you’re hiring someone to do that, you may also want to reconsider the position of your fan.

If the fan is right over the shower or bathtub, it gets the air at its warmest point, which means the air will condense very quickly in a chilly ventilation pipe. If you install the fan as far away from the shower or tub as possible, the air will have some time to cool before it gets there, and if it’s traveling through an insulated pipe to the outside, it’s even less likely to condense and start dripping.

Run the fan effectively. You should also try to remember to run the fan (we know, the sound is annoying!) while showering or bathing, and then for 10-15 minutes afterward, to make sure all of the moisture is pulled out of the bathroom. That will ensure condensation isn’t building up and hanging out in your ventilation pipes, exactly where you don’t want it to be.

Run a dehumidifier. Ongoing moisture problems in your house could be due to: poor insulation overall, an unfortunate quirk of home placement that results in high humidity, or simply where you live. A dehumidifier will reduce these issues and make you more comfortable during the humidest times of the year. Install enough dehumidifiers to ensure complete coverage of your house, because these devices can only cover a limited area.