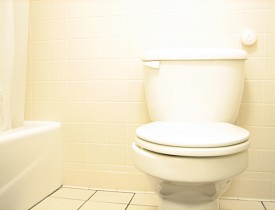 San Francisco made national news this month for a lingering stench. Haight-Ashbury hippie jokes aside, city officials traced the smell to low-flow toilets.

The city said the push for efficient toilets has helped save 20 million gallons of water per year, but also left what the city euphemistically calls sludge backing up in the sewer system without enough water to flush it down.

The problem of clogged pipes can also happen in homes with low-flow toilets, and is one of the two main complaints with water-wise commodes. The other complaint is that the toilets don’t flush everything. Both complaints are somewhat outdated, and can largely be avoided with proper toilet use and maintenance. The environmental and financial benefits of low-flow toilets should outweigh these concerns.

We’ll tackle the second complaint first. The standard solution to the failure to clear the bowl is to simply flush again, but this negates a new toilet’s water savings. A lack of flushing power was a widespread complaint in the early 1990s, after the U.S. Congress first passed a new mandate requiring all toilets to use 1.6 gallons of water or less per flush.

However, successive generations of toilets have been better at getting everything out of the bowl. The Environmental Protection Agency and consumer groups report fewer complaints in recent years about the flushing power of low-flow toilets. In fact, a recent study showed equal amounts of double-flushing in homes with both traditional toilets and low-flow models.

Newer toilets are becoming ever more efficient and water-wise. Through innovative designs and pressure-assistance devices, the new toilets are able to clear the bowl, but send even less water down the pipes. High-efficiency toilets can be tough on older plumbing systems.

The city of San Francisco is dealing with its lack of flow with $100 million in system upgrades, and a controversial $14 million plan to pour bleach into the sewer system to neutralize the odor and disinfect the water.

Upgrades would also help with some home plumbing. PVC pipes are better for handling the minimal flow of newer toilets. If you still have older cast-iron pipes, traditional gravity toilets may not be equipped to handle the low flow. Instead, consider a pressure-assisted toilet, which enhances the flush with pressurized air in the toilet tank. Be warned that pressure-assisted toilets are more expensive and more noisy, which may be an issue for a bathroom adjacent to a bedroom, but they typically require less maintenance.

Moreover, most problems can be avoided by only using the toilet for its intended use. High-efficiency toilets are not designed to handle paper towels and other trash.

Also avoid using chemical in-tank cleaners. The harsh chemicals can deteriorate some of the toilet hardware. They also change the composition of the water, interfering with flushing velocity and power.

When replacing parts, try to find the original manufacturer’s equipment rather than after-market parts. The extra cost and effort is worthwhile in the long run, as some after-market parts do not work properly.

Low-flow toilets have caused occasional headaches for both homeowners and civic sewage systems in cities such as San Francisco, but most users report few problems with the new generation of low-flow toilets.

Replacing an old model can easily cut your toilet’s water usage in half, and cut overall indoor water use by 16 percent, according to the Environmental Protection Agency — savings of 15,000 to 20,000 gallons for most families.

When selecting a new toilet, look for models with the WaterSense label. They are both more water-efficient and very effective. They have all passed the rigorous Maximum Performance (MaP) test, which sends latex-wrapped soybean paste down the drain to test real-world conditions.

Good high-efficiency toilets can be expensive, but the EPA estimates that they provide $50 per year in water bill savings for the average family. Also, your water company may offer substantial rebates.

The savings in water, particularly in the arid West and other drought-prone areas, should outweigh the relatively minor and typically outdated concerns about low-flow toilets.