A Guide to Bathroom Euphemisms 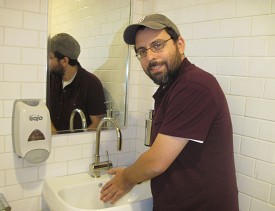 Whether you're in the habit of excusing yourself to go to the "powder room", "the loo" or "the John", you're using a euphemism, a term that sugarcoats or tiptoes around the precise word for describing something considered unpleasant or impolite. As with the direct terms death and sex, there's never been a shortage of euphemisms for bathroom, and rightly so.

But it must be said that not all euphemisms are equally effective — some are too graphic, some too cute, some too old-fashioned — and a bad euphemism often is worse than the word you're trying not to say. Language, like a bathroom, is best when it's updated from time to time.

Powder room: A traditional favorite and still used to describe a half-bath near a home's front entry. The funny thing is, kids are never quite sure what goes on in a "powder room."

Ladies' room/men's room: Clearly on its way to becoming outdated.

Washroom: Acceptable? Yes. Normal? Definitely not -- unless you're in Canada.

Restroom: The most appropriate term for bathrooms in public places, but only in public places. Ask someone in their home where the "restroom" is and they might think you're a foreign spy who's just blown his cover.

Potty: Acceptable only when speaking directly to or about small children. Be aware that adults without kids may be uncomfortable with this word, understandably.

W.C.: You still hear this innocuous term in Britain, where it's often used on public signage. It's the abbreviation for "water closet."

The John: Not acceptable in polite company but standard terminology around construction sites, hockey games and any NASCAR event.

Lavatory: It's okay to use this anywhere, but few people born after WWII will have any clue what you're talking about. Its current definition is bathroom sink.

Little girls room/little boys room: This disturbingly precious and outdated term should not be used for any age of bathroomgoer, but it's worst for adults, implying that they're going in there to "tinkle" (see below) and might need help pulling up their undies.

The can: This relatively innocent slag term focuses on the toilet itself and therefore is simply not euphemistic enough for broad use. Other entries in this category include the head, the pot, the crapper, the throne and even the toilet, as in "I'm going to the toilet." It's just a little too specific.

Loo: While this is perfectly acceptable colloquial slang when used by Brits and other speakers of British English, it sounds pretentious and affected when used by Americans. Same goes for snaps (photos), cheers (thanks) and sacked (fired).

Facilities: Vague and unnecessarily formal. In other words, phoney-baloney talk, like using dialogue instead of conversation.

Privy: An accurate and meaningful term…in the 14th Century.

Smallest room in the house: Innocuous, but so, so stupid.

Comfort station: Don't even go there.

Printable Euphemisms for What Is Done In the Bathroom

Doing one's business: If this is the kind of "business" you're in, I think I'll take my business elsewhere. In today's usage, this phrase is commonly reserved for dogs, and it still isn't acceptable.

Powder one's nose:  Because no one actually powders their nose any more, this clearly indicates that you're going in there to do something entirely different.

Tinkle: Like church and state, cutesy and bathroom activities should remain forever separated.

Toity: As in the word that usually follows hoity. Same as above; too cutesy.

Talk to a man about a horse: Whatever this is supposed to mean, I don't want to know. Apologies to anyone who's never heard it before.

#1 and #2: Still useful if it's necessary to convey the precise nature of a bathroom visit, such as in telling an embarrassing story or when you call a plumber and need to explain exactly what happened just before the toilet backed up.

Bathroom: Ironically, the very word we've been avoiding for centuries is now the best and least offensive term to describe both place and action. "Where's the bathroom?" can be asked in any context, any company and  almost any language. And reporting that someone is "in the bathroom" conveniently fails to specify what they're actually doing in there. However, since we make it explicitly clear when we're headed in for a shower or bath, the common usage of bathroom for other activities is indeed a euphemism. But it's as close to the real thing as we need to get.

The Most Important Quality In A Tiler? Attention To Detail