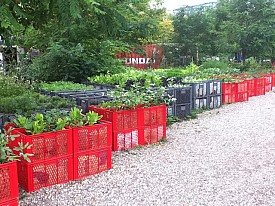 Founded in the 1980s, Coney Island's Boardwalk Garden was a beloved spot for community members, who made use of the site to grow a profuse array of vegetables, raise chickens, and even house cats down on their luck. When the rumblings of development threatened the site, people fought back, but a body blow was struck over the weekend when developers came in the dead of night to raze the garden, crate up the chickens and boot them to the sidewalk, and serve the cats with eviction notices. In only a few hours, nearly 30 years of history were swept away under the treads of earthmoving equipment.

This isn't the first time a community garden has been forcibly expelled from its established home, and it's not even the first incident where developers facing angry community members have chosen to clear gardens at night in the hopes of avoiding conflict. Shocked gardeners arrived at the site on Monday morning to a site of total devastation, and they struggled to pick up the pieces: the chickens were taken in by a gardener, which others tried to round up tools and equipment. The demolition happened so quickly that community members didn't even have time to harvest what they had growing in the garden.

Younger community members noted that many older adults had enjoyed working in the garden; gardening and horticultural therapy can be valuable for people who might feel isolated from the community, a common issue for older adults. Former Boardwalk Garden members are facing not just the loss of a source of food, but also the destruction of a community hub, and they need to find a new location to set up, if they can.

City officials claim the garden was "decommissioned" in 2004 and had been operating illegally ever since, justifying the destruction. Gardeners don't seem so convinced, and the incident may lead to futher tensions in the area, highlighting the fact that a growing number of people are getting involved with urban gardening, and many of them are getting vocal and assertive in defense of the right of green spaces in urban environments. What's next for the Boardwalk Garden remains to be seen, but it most assuredly won't be growing where it used to be.

Successful relocation of urban gardens for development purposes has been pursued in some communities, but it does come at a cost. Gardens that have been worked for decades usually have especially rich, high-quality soil, thanks to the hard work of gardeners, and this is not something that's easily relocated. Many also have their own infrastructure, including fencing, raised beds, sheds for tools, greenhouses, and more; resettling an urban garden in these cases involves providing some kind of compensation or assistance with rebuilding from New York carpenters.

The situation can get even more complicated when a garden also includes permaculture like fruit trees, which do not take kindly to relocation once they're mature. For a well-established urban garden that's been worked on for years, relocation isn't necessarily the best choice: better options can include integrating the garden into a development project, or reconsidering proposed development of land.

After surviving Hurricane Sandy, nearly three decades of development pressure, and the harsh realities of urban life, the Boardwalk Garden vanished in a single night, illustrating how fragile urban gardening can be without the support of city officials and development firms. This case shows the importance of cultivating strong community ties, securing and defending permits and other legal permissions, and being vocally engaged with permitting and development processes.

Garage Door Reinforcement Was A Fast And Effective Solution