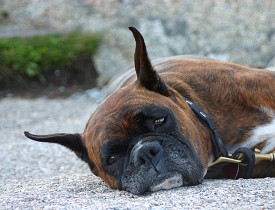 Most responsible homeowners make an effort to keep harsh chemicals, rat poison and other dangerous substances away from pets. However, the same people may not realize how many other pet toxins lurk in the home. Here are 10 other items that could make your pet sick.

1.     Ibuprofen: You may have the best intentions in trying to treat your furry friend with human pain medications, but no drugs should be given to pets without first consulting your veterinarian. Ibuprofen in particular can cause significant intestinal and kidney damage, and many other over-the-counter and prescription medications for humans can also harm animals. Bear in mind that childproof medicine bottles are not necessarily animal-proof, and pets could ingest a whole bottleful of drugs.

2.     Pet medications: It’s also important to keep animal medications out of reach of pets. These treatments are often enticingly flavored, so if pets find their way into the bottle, they are likely to gobble far more than a safe dosage.

3.     Grapes and raisins: Remember to be careful with snacks for animals. Grapes and raisins may cause kidney failure in dogs. Some tests show as few as seven grapes can be toxic. Onions and garlic are also dangerous for both cats and dogs, though typically in larger amounts.

5.     Chocolate: It’s not a myth propagated by chocoholics trying to hoard their sweets. Chocolate can be deadly for dogs and other pets. A mild stimulant in chocolate can be far from mild for pets, causing seizures, vomiting, diarrhea and heart problems. Dark chocolate is particularly dangerous. Coffee and other caffeinated drinks contain similar substances, too.

6.     Alcohol: Your dog may be your best bud, but don’t share a Bud with him. Even small amounts of alcohol can cause gastrointestinal and respiratory problems in many animals, and may be deadly.

7.     Lilies: Lilies top a long list of common plants which are often toxic to animals. A cat that eats even small amounts of lily parts can incur severe kidney damage. Other dangerous species include sago palms, tulip bulbs, azaleas, rhododendrons, yew, English ivy and more. Talk with a knowledgeable landscaper about making your yard pet-safe.

8.     Batteries: Again, most corrosive acids are kept away from pets, but pet owners may not think of keeping batteries well out of reach. Battery acid can cause corrosive injuries to the mouth and stomach of many animals. Liquid potpourri may also be similarly dangerous.

9.     Christmas trees: If pets eat tinsel and other decorations, the material could cause intestinal problems. Similarly, Christmas tree water might contain dangerous bacteria and fertilizers.

10. Citronella candles: Citronella smells good, so it attracts dogs, but it tends to cause diarrhea and stomach cramps if ingested.

These 10 substances may be hidden pet poisons in the home. On the other hand, there is no evidence that Febreze can be deadly for cats and other pets, despite dire warnings to the contrary floating around the Internet.

If your pet may have consumed one of the above toxins or other dangerous substances, contact your veterinarian or call the ASPCA Animal Poison Control Center 24/7 emergency number at 888-426-4435.

Look To Independent Contractors For Fast Service And Good Prices

Water Heater And Air Handler Replacement For Our Condo Downsize