We Tested It: Electric Chainsaw 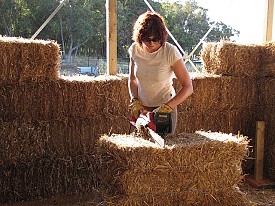 Up until a week ago, I've been cutting most of the tree parts on my biggish suburban lot with a Sawzall fitted with a pruning blade. This worked surprisingly well and, most importantly, I already owned the saw. But after some big storms over the past year, the large limbs and trunks have piled up. I could call a Denver landscaping and tree service to help out, but I'd prefer to do it myself. Just thinking of cutting all that with a reciprocating saw (or an old-school bow saw) made my arms hurt. So I broke down and bought a chainsaw. An electric chainsaw.

Would I recommend it to a friend? Absolutely, especially if that friend is like me and needs low-maintenance tools (lazy, forgetful), doesn't require total freedom of mobility (no interest in tree carving) and doesn't idolize the guys on Ax Men (electric might lead to an inferiority complex).

I'm sure that hardcore tool hounds and seasoned homesteaders feel that an electric chainsaw is the power-tool equivalent of a wine cooler, and I can understand this. If I'm helping out a friend on a building project, I always bring my own tools, lest I'm forced to work with a "power tool" of the sort that might be stored in a kitchen junk drawer. Prior to my purchase, the only electric chainsaws I'd seen in action were the tiny, whiny models used to put a fresh cut on Christmas trees. These things could be made by Fisher-Price. So I never gave electrics much consideration. Then I did some research and found plenty of models with decent power ratings. The one I got has a 16-inch bar, weighs 11 pounds and pulls 14.5 amps. That's a little more muscle than my professional-grade circular saw, which has never wanted for power.

They're quiet, they aren't stinky, they're non-polluting and thus more ecologically friendly, and the maintenance is much less of a pain in the aspen. Make no mistake, there's still a fairly long list of regular chainsaw maintenance tasks and safety checks (chain tension, oil, sharpening chain, chain brake, etc.), but with electric there's none of the finicky gas-engine worries, and the maintenance list for gas saws is longer than that of most other two-stroke yard equipment.

The fume-free operation of my electric saw is nice, as expected. Less predictable was the quietness of the saw. It's much less noisy than a circular saw or router and was even comfortable without ear protection (but you would never do that, right?). Another nice quality is that the noise is relatively constant; nothing like the up-and-down sensory trauma of a gas saw.

What's Not So Great About Electric

Portability and power -- that's where electric chainsaws fall behind. These are not insignificant drawbacks. If either of these is a critical factor, better get a gas-powered saw. Chainsaw power is commonly measured by cutting speed. Gas saws cut faster than electric because their chains run faster, not to mention the fact that many gas saws can have much more powerful engines. Chain speed and power also translate to smoother cuts and less pressure required to make cuts.

Granted, I don't have a developed frame of reference for chainsaws, but I'm quite pleased with this tool's performance. I tested it on everything from 1-inch-diameter sucker branches to a 13-inch semi-green trunk. Clearly it doesn't buzz through the big stuff like an aggressive gas model would, but it's plenty fast for clearing out a pile of logs and limbs a few times a year. I like the responsiveness of the trigger and that the chain stops quickly on its own (no coasting like with most woodworking saws).

At 11 pounds, the saw seems very lightweight and maneuverable for a two-handed tool. The cord definitely was a drawback: it pulled out occasionally (from the saw, not the outlet), and I had to adjust it frequently to keep it clear of the cutting area. I also stacked my woodpile on top of it; that's called being a knothead. But given that I'll never be doing any cutting from up in a tree, I can live with the cord issues.

Speaking of cords, if you go with an electric chainsaw, be sure to use a heavy-duty power cord (not the pencil-thin green kind suitable only for holiday lights), and plug it into a GFCI outlet. Most garage outlets in newish houses are GFCI and should be 20-amp, so there's little chance of overloading the circuit even if some other things are drawing from it. GFCI protection is standard for all outdoor work and if you don't have such outlets installed, call an electrician about it pronto. The nice thing about this is that helps prevent death.

And if you're having trouble keeping your chainsaw plugged into your extension cord, check out this great tip from Fine Homebuilding on keeping power tools...powered.

A Couple of Good Features

My saw has a safety chain brake, or kickback brake, a lever that's activated by your hand (essentially involuntarily) if the saw kicks back and makes a beeline for your forehead. A chain break is a standard feature on gas saws but doesn't come on all electrics. Seems like a good idea though, don'tcha think?

Another feature that should appeal to chainsaw beginners like me is an automatic chain tensioner. It's not exactly automatic, but all you have to do is turn the tensioning knob until it stops, and the device maintains the proper chain tension by itself. Whether this and other important parts (such as the motor) of my new electric saw will last over the long haul, only time and the trees will tell.

P.S. OSHA has some chainsaw safety tips you might want to read over before firing up your new purchase.

I Needed To Install Shower Safety Rails After My Knee Surgery