We Tested It: Cleaning With Vinegar 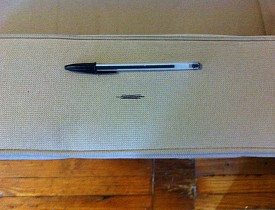 The real secret to cleaning with vinegar is to not be an overconfident jerk about it. But we’ll get to that part a little later. For now, let’s just start back at the beginning.

I had always thought of vinegar in relation to cleaning the same way I think of tofu in relation to food. Fine if that’s what you’re into, and I understand it can be good, but it’s really none of my business. I’d just as soon eat/use something else. Nonetheless, I spent the morning testing vinegar as a way to clean a few things, and it turns out, it’s… awesome? No, that’s a bit much. I take back “awesome.” Let’s go with “a thing that works.”

It’s really easy to find different uses for vinegar online. In fact, if you just type in “uses for” in your Google search bar, the very first page that comes up includes “uses for vinegar.” That is, paradoxically, the most interesting and most boring Google fact I have ever stumbled across. And, on just about every uses-for-vinegar list, you’ll see a suggestion on using it to take care of the smell in the kitchen after you burn something. You just put vinegar on a rag and flap it around. It really does help. I burned bacon the other night, and the smell permeated the entire apartment. After the vinegar rag flapping, however, it smelled like I had barely singed the bacon and then made some moderately strong buffalo sauce.

I also tried a half vinegar/half water mixture to clean my laptop. It worked really well. This is probably the cleanest this filthy computer has been in a couple of years (we've reached a low point for electrical devices in my NYC apartment). My fingers aren’t even sticking to the keys as I type right now. And the vinegar left no streaks on the screen the way a plain damp rag always seems to do.

I next tried using vinegar as a way to remove the residue from a price tag sticker. It absolutely worked. The sticker gunk came off immediately. And now, nobody will ever know that the bottle of vinegar I bought to test all this stuff out only cost 70 cents.

By the time I had successfully used vinegar to clear out a burned smell, clean my laptop, and to remove sticker residue, I got a little overexcited, and decided to take on the herculean task of cleaning the mildew off my shower curtain liner. Before we continue, let’s quickly go through the lifespan of shower liners in my apartment. Every couple of months, I buy a shower liner. Then, within a few weeks it gets mildewy. Next, my roommate and I discuss cleaning it. Then, a couple more months pass and neither of us actually cleans it. By that time, what has developed is a thick layer of mildew so terrifying to behold that we buy a whole new liner, and the process starts over. I was at the thick layer stage when I tried vinegar. I put a half cup into an old spray bottle and sprayed every inch of my shower liner. I then lightly rubbed the liner against itself the way you would pretreat a shirt stain with detergent. The mildew immediately loosened and then rinsed away completely with water. The whole liner was clean in less than five minutes. I was astonished. (TIP: It also works well on grout and tile.)

Can Vinegar Do Anything?

At this point, I figured that if vinegar could clean my horrifying shower liner, it could do anything. I read somewhere that vinegar could easily remove pen ink from a shirt. I was sitting on my couch with a pen at that very moment. But, my shirt was too dark to try out the ink test. I confidently drew a dark line on my couch’s armrest.

I then got my spray bottle of vinegar and sprayed it on the ink stain, then scrubbed the hell out of it. And this was the end result. 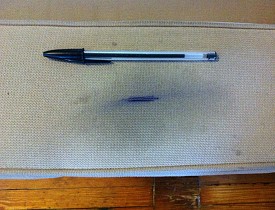 It turns out I just ruined my couch. Vinegar had worked so well for everything else, that I didn’t even consider for a moment that it might not work flawlessly on everything thereafter. That obviously proved to be a mistake

Vinegar is great as a cleaning product. I would encourage everyone to try it out for odor removal and mildew cleaning. Just don’t get too overconfident with it. You’ll ruin your couch.