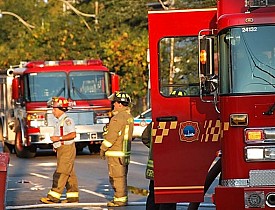 During summer months, house fires are less common but still a hazard. Just because the Christmas tree lights are off and the fireplace is empty, don’t get complacent about fires in the summer. Here are some statistics regarding summer house fires in the U.S.

2. Cooking, which does not stop for the summer, is by far the leading cause of house fires, accounting for 32 percent of reported residential fires in 2005. Many cooking fires are caused by grease or oil that ignites on an unattended stove, or the heat from a burner ignites dishrags or other items left near the stove. (NFIRS.)

5. The leading cause of fatal fires is smoking. Smoking-related fires are common throughout the year. (NFIRS.)

6. Arson fires, which are the third-leading cause of fire injuries and fatalities, and suspicious fires peak around the July 4 holiday, when fireworks are used to start many outdoor and indoor fires. Fires in vacant houses spike at the same time (NFIRS.)

8. Short circuits and other electrical malfunctions are the leading causes of air conditioning fires. Routine inspections of air conditioning systems help detect and prevent such malfunctions. (USFA.)  Incidentally, annual inspections of your a/c system can do more than prevent house fires. The Edison, NJ home energy audit company Woodbridge Environmental Tiptophouse states, "The biggest killer of an a/c system is dirty coils and lack of air flow through them." Hire a pro to inspect and clean your air conditioning system once a year.

10. Air conditioner fires are most likely between 2 and 8 p.m., which is typically the peak load time for air conditioner usage. (USFA.)

11. Attic fires peak in both the summer and winter. The highest peak occurs in December and January, when electrical malfunctions cause a large number of attic fires. However, numbers also spike during the summer, when lightning and other natural causes start more attic fires. (USFA.)

Summer is no time to be complacent about fires. Be sure to continue checking smoke alarms and practicing fire safety around the home.