How to Choose a Microbrew 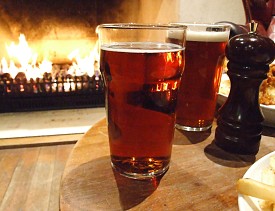 "The microbreweries are making beer the way it should really be made," said Christie Faufaw, co-owner of Ryan & Casey Liquors, in Greenfield MA.

Microbrewed beer has become so popular that Faufaw’s business advertises "The Mile-Long Beer Case." The case isn’t really a mile long, but it seems like it given the explosion of new beers available. Now there are beers that come with exotic spices, unusual fruit flavors (such as blueberry), and even varieties that have coffee and chocolate as ingredients. "The whole reason microbrews have become so popular is people like so many different things," said Faufaw.

Even if you get back to basic varieties, such as Pilsner or IPA, what really makes the brew exceptional? Bill Goldfarb, owner and master brewer at Lefty’s Brewery, also in Greenfield, offered up some tips.

"What people tend to look for in their microbrews are the flavor profile, the mouth-feel, the texture, and the body," said Goldfarb. Goldfarb added that sometimes the setting or the food paring, which like wines, is becoming more prevalent in upscale restaurants and with well-renowned chefs, is a factor in selection as well.

Goldfarb said that there really are only two kinds of beer: ales and lagers. "The type of beer depends on the temperature the yeast is fermented at," said Goldfarb.

There are four basic ingredients in any type of beer: water, hops, malt (grain) and yeast, all of which can be put together in varying quantities for different types of flavor, head or body. From there, the sky appears to be the limit in terms of ingredients.

"The flavors and aromas, the quality of the ingredients in the product make a huge difference," said Goldfarb. "For example, some brewers use whole leaf hops and others use hops that have been pelletized," he added.

What to look for in your microbrews

"The first, most important thing is freshness. That’s another reason microbrews have become popular. Local ingredients, brewed locally, are one of the largest reasons to purchase microbrews for some people," said Goldfarb.

Goldfarb said that stouts are a very full-bodied beer "with robust flavors, and a thick creamy head. It’s a very rich beer." For Red Ales, Goldfarb said to "look for a nice malty tone. There’s a sweetness that you get from that and you want to have a light hop profile. The malts are the pronounced flavor in a beer like that."

Goldfarb makes a beer that uses coffee and another that includes a very fine chocolate. Microbrews may include ingredients such as lemon, nutmeg, pumpkin flavors, ginger, and even milk. "To each his own when it comes to all the flavorings that that are now being incorporated in beers," he said.

Cris Carl is a Networx writer. Read more articles like this one or get help with your home project on Networx.com.

Condo Painting To Refresh Walls And Trim In Every Room