The Progression of a House Fire 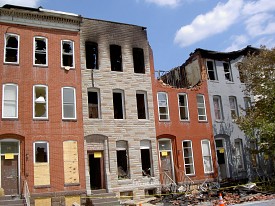 Having a house fire is one of my greatest fears, especially when I'm away from home and my paranoia is allowed to imagine up all sorts of horrendous scenarios. I'm the kind of person who checks the stove and heater before leaving the house, fusses over the electrical wiring, and takes special care when snuffing candles -- and not just I remember a friend losing his home to arson when I was a kid.

I always think that one of the best way to deal with your fears is confronting them head on, so I researched the progression of a house fire to understand how and why they happen. Having that information is key to the other part of the battle: reducing the chance that one will happen to me, using sensible, evidence-tested means.

It can take as little as 30 seconds for a small spark to turn into a conflagration from which people have only a few minutes to escape, thanks to the increasing number of highly flammable materials being used in home construction and kept around the home. Synthetic materials are a part of our lives now, but unfortunately, they don't offer the fire resistance available from cotton, wool, linen, and similar fabrics and other natural materials.

Almost half of house fires start in the kitchen, typically on the stovetop, where something boils over and onto a hot burner. That's actually an easy point to catch and stop a fire, if you don't lose your cool: you should have a fire extinguisher rated for kitchen fires in the kitchen, along with baking soda if necessary. Both substances will cut off the supply of oxygen to the fire, knocking out a critical leg of the fire triangle (fuel, air, and heat).

If your kitchen is dirty (including your range top or hood), the fire can spread very fast. Grease may spatter across counters covered in debris, jump to the table, and snake its way across kitchen messes, with flames leaping behind, causing the fire to leap around the kitchen. Within seconds, the kitchen will be a haze of flames and smoke, which will make it hard to see or escape. Heat rises, carrying heat and vapors into the upper levels of the house.

The more the fire spreads, the hotter the air inside the house becomes. At this point, it would be difficult to breathe without incurring serious lung damage, and parts of the house would be reaching the point of spontaneous combustion because of the heat. That's when you get a phenomenon called flashover, where abrupt and very rapid combustion effectively causes a room to explode with flames. Once one room catches fire, flames will quickly spread, and a home can be fully involved within minutes of the initial flames.

The second most common cause of house fires is heating equipment, which is why it's important to make sure yours is in good working order, so have an LA HVAC technician take a look at your system if it hasn't been checked in a while. Careless smoking, electrical equipment, and candles come next, followed by playful kids, out-of-date wiring, flammable liquids, Christmas trees, and barbecues. Tragically, many of these causes can be addressed before they cause a major house fire, and programs are even available in some cases to help people mitigate their fire risks (for example, Christmas light trade-ins let people get rid of older strands of lights in exchange for new LEDs).

A few simple measures can radically reduce the risk of fires in the home. Anything that produces heat or an open flame shouldn't be left unattended, and should be regularly serviced (if applicable -- obviously, your chimney needs to be swept, but candles don't require regular servicing!). Keeping your house clean and as free of dust and flammable chemicals as possible will limit fuel that a fire could use to spread, while installing fire extinguishers and fire detectors so you can act fast when the worst happens is strongly advised (and legally required, in some areas).

You should also have a fire plan in place. With only minutes to escape in an emergency, you need to know exactly how you're going to get out and where you're going to meet up with family members. Once you're free of the danger zone, you can communicate with first responders about who might still be inside and what to do next. It helps them to know where the fire started (if you know), and if you have information about the electrical wiring, plumbing, and floor plan, make it available so they can plan their strategy more effectively.

Be aware that while first responders have the first priority of trying to save lives (including those of your pets!), if a fire team deems a house too dangerous to enter, they will focus on trying to control the fire enough to get inside, and working to keep it from spreading. If you lose your house but everyone gets out alive, that's a positive outcome from their point of view -- and far from the worst outcome for you, too, even if you're already worried about the cost of remodeling or starting over from scratch.

While first responders understand how anxious you are, don't interfere with their work -- you might endanger them or your community. Instead, follow directions from firefighters, police, and paramedics.