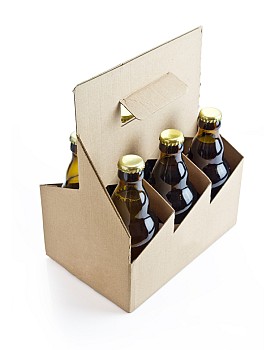 Well this is just about the most fascinating topic that I have written about. It all started this morning, when I was looking for interesting home improvement topics related to the current heat wave that is baking the Midwest and the North(ish)east like a slow cooked roast in a braising pan. What came up on the first page of Google results was a thread from Beer Advocate about beer exploding in one man's cellar due to high heat.

First of all: Beer Advocate, you have great content and you deserve your search presence. I have not read Beer Advocate before, but let me tell you it is a website that is rich in highly useful information, both editorial and user-generated. There are no fancy graphics, the site is set up almost entirely as an old-school forum, and it is searchable, usable, and fantastic. A person could go down the rabbit hole for hours there. Beer Advocate, I commend you on your content strategy.

Moving right along: As a fan of anything cold and hoppy that comes in a bottle (or a can; I'm not elitist), the idea that the heat wave could actually be detrimental to beer is a bit disturbing. We have to protect our elderly or sick neighbors from heat-related sickness, which is understandable (human life and all), and now we have to also protect our beer?

It turns out that, yes, beer needs our protection. Hasten, indulgers in barley and hops, to secure the longevity of your brewskies. Here's how.

Admittedly, I am a beer drinker and not a beer connoisseur. It has come to my attention that there are people in the universe who collect and age rare beers, like rare wines. Since a lot more people are drinking Pabst than are cellaring rare beers and it is generally best to stick to what one knows, I'm writing here about storing regular old beer, otherwise known as "brewery fresh"...beer that does not improve with age. For a well-researched and digestible overview of beer cellaring, click over to Imbibe Magazine's article on it.

The four enemies of beer, according to MillerCoors, one of the largest beer manufacturers in the nation, if not the world, are: oxygen, heat, air, and light. While quick changes of temperature, like putting your beer on ice for a party and then letting it warm back to room temperature, will not do major damage to beer, prolonged exposure to high temperatures is a legitimate enemy of beer.

High temperatures cause beer to oxidize. "Oxidizing" is a fancy word for "going bad." According to MillerCoors, "The warmer the beer, the faster it oxidizes." Pertinent to the current heat wave, they say that beer stored for three days at 90 degrees Fahrenheit starts to lose its brewery fresh taste.

The bottom line: Regardless of the color of the bottle, if your beer is stored somewhere hot, get it into the fridge. If you're taking beer camping or something, storing it in the hot trunk of a car for the weekend is not a good idea. At least try to keep beer bottles in the shade, covered with a towel to keep light away from their precious, precious contents.