Prepare for the Bay Bridge Closure! 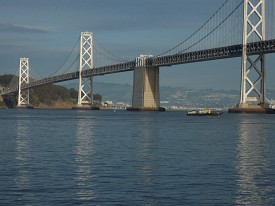 Way back in 1989, I was a wee Northern California child, but I still remember the day I was knocked off the porch railing (while reading Nancy Drew) by the force of the Loma Prieta earthquake. I was fortunately more resilient than the Bay Bridge, which suffered major damage in the quake. Now, 24 years later, the new East Span is finally preparing to open, but first, the entire Bay Bridge has to be shut down for five days to allow concrete contractors and other crews to do their work.

At eight o'clock tonight, both spans of the bridge will be closed to traffic, and they will not reopen until 3 September. CalTrans projects to be allowing traffic onto the bridge in the early morning hours of Tuesday, but drivers should plan ahead in case there are construction-related delays.

Opened in 1936 (before the Golden Gate Bridge, but who's counting), the Bay Bridge started out with cars on the upper deck and trains on the lower deck (along with trucks). It's seen a lot over the course of its life, including conversion of both decks to accommodate cars and trucks, the World's Fair at Treasure Island (many drivers have see the exit in the middle of the bridge, but few have taken it!), the occasional collision with a boat, and, of course, the earthquake that tried to bring the bridge to its knees.

The bridge is still standing, and thanks to 24 years of construction, it's been heavily retrofitted to better equip it for future quakes while accommodating traffic. Meanwhile, the Bay Area is not looking forward to what promises to be traffic and public transit chaos on Memorial Day Weekend (the residents of Treasure Island in particular don't relish the thought of limited public trans during the closure). Drivers are being strongly advised to consider public transit like BART, and if they absolutely must drive, they'll have to take one of the Bay's many other bridges, even if it ends up being a bit out of the way.

Notoriously, the Bay Bridge ran far over budget and definitely exceeded its deadline. Much of the area as well as the state is eager for it to be over, but once it is, the new bridge promises to be a stunner. It will be the longest single-tower self-anchored suspension in the world (for now, at least), and it will also include a bikeway. CalTrans officials are also currently debating whether the resident troll from the existing East Span will be relocated as the old span is dismantled (a process that will take several years).

With all the drama rapidly nearing its hopeful conclusion, though, the Bay Area is ending up with a beautiful bridge to show for all their trouble; and San Francisco contractors must be delighted to see such a monument to construction, architecture, and ingenuity finally getting ready to open to the public.

Here's to the new span: I for one can't wait to drive on it. (And be driven, so I can check out the amazing suspension tower for myself.)