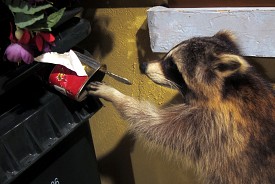 Municipal garbage cans placed along streets and in parks to reduce littering (and hopefully encourage people to recycle) are often quite ugly. It's as though the city was so focused on resolving the trash problem that it forgot entirely about making its garbage cans non-gross. Not so in New York City, thankfully, where a new line of garbage and recycling bins is turning heads, which is precisely the point.

Eye-catching cans, of course, means that people are more likely to actually use them. It's harder to litter when there's a can right in front of your face painted in blaring green or blue that's basically impossible to miss, and the color codes help you quickly figure out which can your unwanted item belongs in. But more than that, the design turns garbage cans into pieces of public art instead of intrusive and ugly practical items in the urban environment.

It's a great example of how you don't have to sacrifice looks for function. You can, as it were, have your trash control (which will help keep public spaces looking, smelling, and feeling so much nicer) and your pretty parks too. Central Park and Bryant Park are to be commended for their forward-thinking approach to garbage and recycling.

The bins at Bryant look like giant tulips, with leaf-shaped blades surrounding a central canister for waste collection. Some of the blades are solid, while others are perforated with playful designs, and the cans are strutting out in a wide variety of colors. Not just green or blue, for example, but a dashing silver and red scheme. Central Park is going for a sleeker, more modern design with twisting metal that's equally appealing to the eye.

In addition to controlling garbage in New York's parks and streets, the cans will help reduce the rat population and limit other pests too. With less garbage for them to scavenge, critters will have to seek elsewhere for their satisfaction, which is fantastic news for public health and people who aren't so pleased about having to deal with rats, roaches, and more. New York pest control can be an ongoing battle, so limiting sources of food is critical to managing the city's famous population of scavengers.

Let's hope they expand the cans to a full range of waste. Right now trash cans and containers for paper are available at both parks, with some for cans and bottles, too. It would be great to see separate containers for food waste collection to raise awareness about composting and the amount of food that gets thrown away annually by consumers in New York City. In addition, of course, hopefully more New York parks and neighborhoods will adopt these flashy cans to help keep garbage off the streets while maintaining the city's sleek looks.

Meanwhile, of course, you can manage your own garbage at home with cans ranging from the designer to the plain, but if you don't like looking at garbage cans all the time, consider hiring a carpenter to build you a nifty enclosure. Hiding cans in an enclosure doesn't just tuck them away out of view when theyr'e not in use: it also makes it harder for pests like raccoons to access them, which reduces the risk that you'll come out in the morning to the contents of your trash can scattered across the street!