What are Hairy, Crazy Ants? 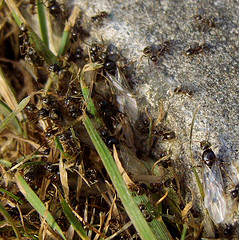 A number of Southeastern states have recently experienced a phenomenon known to many as hairy, crazy ants. The ants swarm in record numbers and are a huge pest. The high density of the foraging ants can make gardening or other activities in infested locations difficult. While not dangerous to humans in the traditional sense, they do pose an economic threat.

Scientifically speaking, the ant belong to the Nylandria genus, though besides being called the hairy, crazy ant it has also been known as the Caribbean crazy ant because it is native to the Caribbean Islands, and the Rasberry crazy ant, named for Tom Rasberry, an exterminator who first discovered them in Dallas. Though the ants have been documented in Southern Florida for at least 60 years, as of late, the species has been spotted in an additional three states.

How to Identify Them

The worker ants are reddish-brown and about 2 millimeters long. The females are similar in color but tend to be about twice as long. The male, non-worker ants are about 2.5 millimeters longs and have large wings. They live in extremely large populations numbering in the millions and are called crazy because they move in quick, rapid, erratic movements. They’re called hairy because their abdomens are slightly fuzzy so they look less glossy that the average ant.

So far, the ants have been spotted in four states: Florida, Mississippi, Louisiana and Texas. While experts think it unlikely the pests will spread to northern states because of the colder climate, there is still a risk that the ants will spread to additional southern states. In the southern states where they are currently found they’ve invaded cars, homes, industrial complexes, and more. They can wreak devastating damage on farms and industrial equipment because they can eat through almost anything. The ants can nest in walls of houses and cause power outages and other damage that requires the attention of an electrician by eating through wires.

The ants are omnivorous, targeting both insects and plants. They can also invade bee hives in order to eat the larvae, and have caused a shortage of bees and honey in Texas as a result. Additionally, they can bite humans, though the bite is not as severe as that of other biting ants.

How to Get Rid of Them

The ants are resilient to pesticides only because there are so many of them and they swarm in even larger numbers if one of them dies. They reproduce quickly and also have multiple queens working together, so killing one won’t do the trick. Therefore, the only measure that exterminators have found to be effective at keeping away the swarming pest is to apply monthly pesticide treatments.

If you live in the Southeast and suspect your home are garden is infested with the hairy, crazy ants, don’t try to get rid of them on your own – you’ll only make things worse. Contact a reliable, experienced pest control service and tell them you suspect you have the resilient hairy, crazy ant.