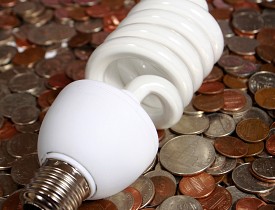 Unless there is some big action by conservatives to repeal Bush administration legislation that requires more efficient lighting, many old incandescent bulbs (or lamps) will become unavailable over the next few years.  This will leave most of us having to look for alternative products to light our homes, the most common being Compact Fluorescent Lamps, AKA CFLs, and Light Emitting Diodes, AKA LEDs.  Somebody seriously dislikes something about both of these newer lamps, often resorting to stocking up a lifetime supply of incandescent lamps to avoid using CFLs and LEDs.  But those are some short-sighted people who are prejudiced against new technology because of bad experiences, rumor, fear, or a combination of all three.

CFLs had a reasonably deserved poor reputation early in their development.  They flickered, the color of the light wasn’t good, they took a while to get to full power, and they couldn’t dim.  On top of that, there is a tiny amount of mercury in them, so there are some safety issues when they break, but trust me, you don’t need a HazMat team to clean up the mess.  Things in the CFL world have changed.  High quality, reasonably priced lamps are available that have excellent light color and quality, don’t flicker, don’t need time to warm up, and are dimmable in standard fixtures.  And as a benefit, they don’t put out 90% of their energy as heat like incandescent lamps, which leads my friend, Architect Michael Klement to describe them as heaters with light as a by product.  This means that you don’t pay so much extra to air condition your house in the summer when the lights are on.  Look for ENERGY STAR rated CFLs, and check for the new FTC lighting facts label that tells you the efficiency and color of the lamp.  If you’re looking for something that resembles incandescent lamps, buy CFLs with a color temperature of about 2700 degrees Kelvin.  Don’t worry about what it means, just know that it is a nice, warm, familiar colored light.  Oh, and the light will use about 75% less energy and last about 10 times longer than the old style lamp.

So, just when some of us were becoming a little more comfortable with CFLs, we now have to thing about buying LEDs instead.  LEDs are electronic, solid state lighting, and we’ve been looking at it for years in our clock radios, microwaves, and other equipment.  The technology has advanced far enough to provide interior lighting, although it is still evolving and not all lamps are quite ready for prime time.  People like the fact that LEDs don’t have any mercury in them, so there is no fear of difficult cleanup (and they generally don't break like a regular bulb anyway).  They last a really long time, an estimated 30,000 - 50,000 hours, compared to about 10,000 for CFLs and about 1,000 for incandescents.  They are, however more expensive, although prices are coming down.  LED efficiency is similar to CFLs, and getting better all the time.  In terms of light quality, LEDs are getting pretty close to CFLs and incandescents but it may take some effort to find something you like the look of.

So what’s a poor consumer to do?  First, accept the fact that incandescents are an obsolete, inefficient technology and you won’t be able to buy them forever.  The choice between CFLs and LEDs, for now at least, is partly financial and partly aesthetic.  LEDs are more expensive, but they last longer, so if you can afford to spend the extra money, you’ll end up even or better in the long run over CFLs.  As for the aesthetics, check out several different ENERGY STAR labeled lamps and figure out what kind of light you like, then stock up on them.

You can also look for the Lighting Facts label, and sort of nutrition label for lamps that includes the energy used in watts, brightness in lumens, estimated yearly energy costs, lamp life, and the light appearance.  This helps you compare different lamps just like your breakfast cereal.  So go forth and shop for your new bulbs.  With a little effort and research you can find some that you like that will save energy and money for many years.

Carl Seville is a green building consultant who works with Atlanta electricians.