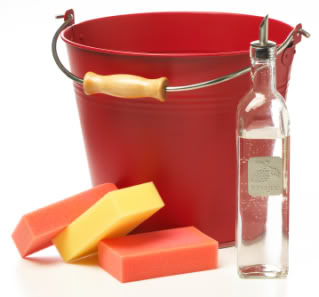 Everyone wants a tidy house, but more importantly, a mold-free environment. Besides being unsightly, mold is also a health hazard and can cause allergic reactions and respiratory problems. The popular and most well-known anti-mold agent is bleach. But is this the best option?

Bleach is an extremely powerful cleaning agent that destroys almost all bacteria, mold and microorganisms – and all it takes is a tiny amount. Bleach has been used for thousands of years in different forms, and some die-hard fans say it’s the only substance that gets the job done. The downside, however, is that it’s harsh on the skin and lungs. In addition, its production process is damaging to the environment, with bleach plants releasing cancer-causing dioxins and mercury into the air. What’s more, if used together with other chemicals, such as those containing ammonia, it can create toxic fumes in your home.

Vinegar is produced from the fermentation of ethanol and typically contains between 4% and 8% acetic acid. Because of this acid, vinegar, especially when combined with baking soda or hydrogen peroxide, is an effective mold and bacteria killer. While not as strong as bleach, according to some estimates it can destroy over 80% of bacteria. In addition, its production doesn’t take a toll on the environment and breathing in the fumes of vinegar, while unpleasant, is not harmful.

Because of its non-toxic nature, it’s safer to use vinegar on almost all home cleaning needs, including eradicating mold. Bleach is ineffective in cleaning porous surfaces such as concrete, wood, drywall and unsealed tile. Though bleach will kill mold on the surface, the roots within the material will remain and enable the mold to return. Vinegar, on the other hand, can be used on these materials if quickly removed, though it should not be used to on stone tile such as marble or granite because it can eat away at the surface and cause discoloration.

If vinegar isn’t strong enough, bleach can be used as long as it’s heavily diluted and the room is well-ventilated. In addition, don’t use bleach together with other cleaners because this can result in toxic fumes. If you employ a cleaning service, be sure to warn them about the toxic nature of bleach and make sure they exercise caution when using harsh chemicals.

The best way to fight mold is to prevent it from growing in the first place. Mold thrives in humidity. If you live in a hot, humid climate like Houston, one way to reduce humidity is by running the air conditioner. This will both keep your home at a comfortable temperature as well as reduce humidity. However, it’s important to consult with a professional A/C contractor when purchasing one in order to select the right sized unit. A too small one will be unnecessarily expensive while one that’s too strong will cycle off frequently and not dehumidify the air properly. In the winter you can run a dehumidifier in moist locations.

When using any substance to clean mold, be sure to keep it out of the reach of children. In addition, gloves should be worn to protect your skin. Happy cleaning!