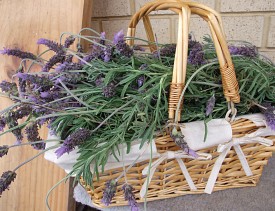 Storebought air fresheners often just mask household odors, leaving behind a synthetic stink that isn’t much better than the original smell. But your home is already filled with natural and completely free air fresheners. Many of the things destined for the dustbin or compost heap can actually be repurposed as free, natural odor-neutralizers. Here are ten alternatives to air fresheners that you have probably been throwing away for years.

1. If a pungent cloud of foot odor seems to permanently hover over your shoe rack, combat it with used dryer sheets. The fibrous texture of dryer sheets is great for absorbing moisture and odors, and there should still be enough fragrance left in the used sheets to perfume your shoes. Make this solution natural by using eco-friendly dryer sheets.

2. If you get caught in the rain and need to quickly dry out and deodorize a wet pair of sneakers, stuff them with old newspapers.

3. No matter how often you run your garbage disposal, at some point it will start to stink. To keep the smell of rotting food from welling up from your plumbing, pop a few used lemon or lime rinds into the disposal and run it for a minute. Shut off the disposal and fish out the rinds and your sink will now smell of fresh citrus.

4. If you’re a fan of fresh flowers on the table, or fresh herbs in your cooking, you know all too well that they wither and dry out far too quickly. But rather than tossing that faded bouquet or bundle of herbs, transform the petals and fronds into DIY potpourri.

5. A bowl full of used coffee grounds is a great way to remove unpleasant odors from the fridge. To transform the wet grounds into a homemade deodorizer, spread the grounds out on a cookie sheet and pop them in a very low oven until they are dry. You can also rub wet grounds on your hands to remove smells that soap can’t seem to cope with, like fresh garlic.

6. Combat a cat’s stinky litter box by mixing the litter with used dried tea leaves. Not only will the leaves keep the box smelling fresh, but tea also has powerful anti-bacterial properties that can help keep the litter box clean.

7. If you have a barbecue or fire pit, you likely have a lot of spent wood ash. But rather than throw this precious material out, add a little to your compost bin to keep it from smelling.

8. Knock the smell out of a stinky microwave by boiling lemon peels in water for a few minutes. Pour the hot mixture into a bowl and seal it up in the microwave for several hours.

9. Sunlight isn’t exactly something that we “throw out,” but many people keep it from the home with heavy blinds. By throwing open the windows and letting the sun shine in, you can limit the growth of odor-causing bacteria.