How To Make Household Disinfectants With No Bleach 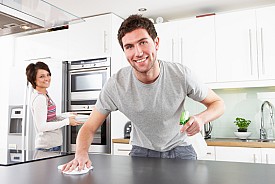 I’m torn. I am a hippie at heart. I was raised by hippies. I grew up weaving yarn on a loom and dancing to drum circles. Some people are born with a silver spoon? I was born with a burning sage. You know, for cleansing.

But here’s my dirty secret: I love bleach. I love it! It makes me feel clean and safe and sanitary and most of all, oh man that stuff works.

But I know, in my hippie heart and even in my scientist brain, that although chlorine bleach may do the job, it’s not exactly innocuous. Cleaning with bleach releases chlorinated volatile organic compounds, or VOCs, which are toxic carcinogens. The chemical load that we are releasing into the atmosphere is astronomical, and truly frightening.

Chlorine bleach is also a health hazard. It’s corrosive and can burn the skin, ruin clothing and other materials, and rust or damage metal. It releases powerful fumes which can cause eye, nose, throat, and gastrointestinal irritation. If mixed with other chemicals, like ammonia, it becomes a serious poison and can even be fatal.

Okay, so what are the alternatives? And are they any good? Let’s take a look.

Oxygen Bleach: Oxygen bleach sanitizes and cleans just like a traditional chlorine bleach. However here, the main ingredient is hydrogen peroxide instead of sodium hypochlorite. Oxygen bleach is effective against bacteria, viruses, molds and mildews and most other organic material. It’s powerful stuff, just like chlorinated bleach.

However, when oxygen bleach breaks down, the only thing it leaves behind is water, oxygen, and soda ash. That means it has no negative environmental impact. In fact, it’s considered a natural cleanser. And as an added bonus, oxygen bleach is totally odor-free.

Hydrogen Peroxide: Hydrogen peroxide – the stuff in the brown bottle your mom poured on cuts when you were a kid – is actually an incredibly effective germ-fighter. Like bleach and other cleansers, it’s a strong oxidizer, which basically just means that it reacts with chemical compounds and changes them – and for our purposes, cleans them.

But in strong concentrations, hydrogen peroxide can be corrosive or toxic, especially if inhaled. Though many folks consider it safer than bleach, it still should be used only at commercial (not lab grade) concentrations, and in a well-ventilated area. Like bleach, it can be corrosive to skin, so be sure to wear gloves when cleaning with hydrogen peroxide.

Vinegar: Distilled white vinegar is the disinfectant of choice amongst the chemically sensitive. Vinegar is cheap and natural and completely biodegradable. And so non-toxic that you can eat it! But it’s also a powerful cleanser, killing the vast majority of germs. Admittedly, it’s not quite as potent as bleach, but for everyday use vinegar is an excellent option. Vinegar kills the pathogen that causes the flu. Vinegar destroys most bacteria and salmonella.

So maybe, just maybe, I can take a break from the bleach?

Sayward Rebhal writes about everything from remodeling in San Diego to concrete work for Networx.com.