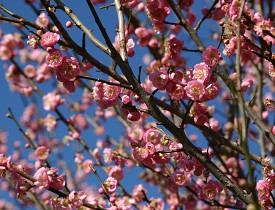 Whether it’s the glistening bark of the paperbark maple, the brilliant fruits of deciduous hollies or the sweetly scented flowers of witch hazels, the garden in winter offers colors and blooms unique to the season. There is a wealth of plants to choose from including not only evergreens but deciduous shrubs and trees that promise to delight during the doldrums of winter.

While it’s easy to be overwhelmed by the spring rush, when often it seems that everything from azaleas to roses, blooms all at once, the winter garden offers a subtle beauty, one that’s quieter and requires that we take a closer look to appreciate its charms. Consult a landscaper about including some of the showstoppers below in your garden this winter.

Fragrant wintersweet (Chimonanthus praecox): While it’s no raving beauty, the delicious perfume of the translucent yellow flowers more than makes up for the somewhat rangy habit of this deciduous shrub.   Zones 7 to 9.

Winter daphne (Daphne odora): For fragrant winter flowers, this evergreen shrub is hard to beat. Whether you grow it in a container or in the ground, make sure it gets good drainage.  Zones 7 to 9.

Japanese apricot (Prunus mume): A small deciduous tree, this apricot is grown for its fragrant flowers which appear in January and February.  The fruits are not known to be tasty. Depending on the cultivar, the flowers may be white, pink, dark pink, double or single.  Zones 6 to 9.

American holly (Ilex opaca):  A native American classic, this evergreen holly has red fruit (there are also yellow fruited selections) that ripens in fall and persist well into winter.  Many selections can grow 40 to 80’ tall at maturity. Only the female selections bear fruit, but they need a male pollinator.  Zones 5 to 9.

Winterberry  (Ilex verticillata): This adaptable native holly drops its leaves in fall when red berries appear (they cover the branches). The fruits persist into December and January and with some cultivars, they last into early spring. For best results plant a male pollinator that will bloom at the same time the female blooms. For example "Southern Gentleman" is a pollinator for "Winter Gold."   Zones 3 to 9.

Paperbark maple (Acer griseum): This small tree has peeling cinnamon bark that stands out in the winter landscape. The dark green foliage often turns shades of red and orange in the fall. An aristocrat, this maple offers year-round beauty.  Zones 4 to 8.

Japanese stewartia (Stewartia pseudocamellia): This is truly a tree that provides interest throughout the year. Striking flowers, attractive foliage and handsome bark that stands out in the winter landscape, a patchwork in shades of gray, orange and brown.   Zones 5 to 7.