What to Do When There is a Bathroom Ceiling Leak 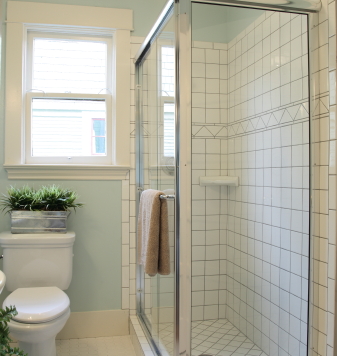 If the ceiling's going to leak in any finished room of the house, it might as well be the bathroom. After all, this is one area that's used to water. But enough of this foolish positive thinking. Your ceiling's sprung a leak and that's never a good thing. So now what to do? First, identify what's causing the leak and confirm that it really is a leak. Then, if necessary, call the appropriate pro to help you solve the problem. Now go find a flashlight and let's get started.

Are You Sure It's a Leak?

Not to insult your intelligence or suggest alarmist behavior, but sometimes what appears to be a bathroom ceiling leak is really a big condensation problem. If you're finding droplets of water in more than one place and you don't have—or don't use—a bathroom vent fan (that noisy thing that alerts everyone to enter the bathroom with caution), you might simply have too much moisture that's collecting on the ceiling surface. The water or water marks might even be somewhat discolored, and that's just due to the fact that no sane person regularly cleans their ceiling (so you're off the hook there).

Prolonged condensation problems may result in peeling paint and/or mold growth, but they're unlikely to penetrate upward into the ceiling material. If the drywall seems solid in the affected area and there's no circular or ring-like water mark on the ceiling around the center of the "leak," try wiping the ceiling to remove all traces of water. Then, open a window or run your vent fan during and after your showers for several days to see if the water comes back. No? You're in luck. It's probably just condensation.

Possible Cause of a Leak

If your ceiling failed the condensation test, it's time to consider possible causes of a true leak. Since you probably don't live in a grotto, there's no chance the ceiling itself is leaking. What about plumbing pipes above the ceiling surface? These could be supply pipes, which could be leaking or possibly have their own serious condensation problems, or they could be drain pipes, in which case the water is not something you want to have dripping onto you (it's on its way to the sewer).

Is there another bathroom above this one? If so, it could have a leaky tub, toilet, sink, or shower. Check the location of each fixture above to see if the leak matches up. Water from a bathtub or shower could come from a leaky drain, supply pipe or faucet, or even from a breach in the shower/tub enclosure, such as cracked grout in the wall tile or a failed caulk joint.

You can test this by not using the shower/tub for a few days to see if the leak stops. A leaky toilet will drip water whether the fixture is used or not. A leaky sink drain will reveal itself on the floor below or inside the vanity cabinet. However, keep in mind that leaking water can travel along the top of the ceiling before it actually drips through to the bathroom below, so the source of any leak might not match up with the stains on your ceiling.

If your bathroom is under an attic space, check for any pipes running through the attic. If there's HVAC equipment up there, have an hvac contractor examine the unit and its service lines carefully. A clogged condensate drain or overflowing pan could drip water onto the bathroom ceiling from above.

Ruling out those potential causes, we arrive at something you've probably already thought of: a roof leak. The question is: Where exactly is the roof leaking? It isn't likely to be directly above where it's showing up on your ceiling. Look for water marks on the underside of the roof sheathing and/or rafters or truss members. Water getting through the roofing can travel downwards and sideways for significant distances before it drops to the attic floor (your bathroom ceiling) below. Any roof penetration, such as a plumbing vent, skylight, or chimney, above the bathroom leak site is a potential suspect.

So let's assume you do have a vent fan, and the duct runs up through a cold attic space. Water vapor in the vented air can condense as it travel through the ductwork, causing water droplets to drip or run back down the duct and ultimately onto your bathroom ceiling and/or floor.

If this is the case, should you still use the fan? Absolutely. In fact, you should use it more often and run it for longer periods to help dry out the duct each time. Run the fan during and for 20 to 30 minutes after each shower. Also, make sure the duct is insulated and that the flapper on the outdoor vent cap operates properly. If you have crummy slinky-style flexible plastic ducting, consider replacing it with smooth, rigid metal, which is better at ejecting the moist air and won't collect condensate like flexible duct can.

If you try all of these fixes and the problem persists, you may need to reconfigure the duct run so the majority of the duct slopes toward the exit vent.