What a Bunch of Wind: Turbines and Property Vaues 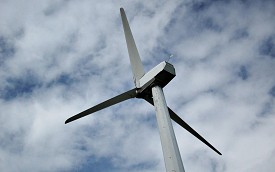 You're probably heard the claim: wind turbines hurt property values! Whether people are protesting the construction of turbines or they're worried about buying in an area where turbines have been installed, they're concerned about the long-term appreciation of their property, and they'd bought the hype.

Well, it turns out, the truth is actually more complicated. Researchers at Lawrence Berkeley National Laboratory got curious about the statement that wind turbines harm property values, because it's a pretty loaded claim. If it were correct, it could have huge ramifications for the alternative energy industry and wind in particular; and real estate agents, planning commissions, and other people involved in the real estate industry would have solid cause to be concerned about turbines.

But if it was wrong, all that protest might cause huge problems. For one thing, needless fights would be happening over the installation of turbines, and while such arguments might benefit conventional energy firms, they could prove highly damaging to alternative energy companies just trying to get started. Plus, resistance to turbines could prove to be immensely frustrating in regions with a great supply of wind for power that couldn't be tapped because of the anger of citizens.

So the researchers were heavily invested in finding out what the real story was here.

In their study, they took a look at home sales in 27 states in regions near turbines. They compared prices, looking at values before any plans for turbines were announced, after announcement, during construction, and once turbines were active. After correcting for obvious factors that influence home values (like the downturn in rea estate values that's plagued the market since 2008), they found no statistically significant changes in home values in homes near turbines.

Multiple studies have actually come up with the same results; at this point researchers aren't covering new ground, they're verifying and expanding the results obtained through previous analysis of home values. Overall, the story is clear. Turbines do not drag home values down, and the claims about negative health effects also appear to be dubious at best. In fact, installing a residential turbine could actually bring your home value up; think of all the money you could save on energy costs in a place like Orlando, where heating and cooling can get very demanding.

What does bring home values down is failing to keep up on planned maintenance, not taking advantage of opportunities to update homes so they keep up with the times, allowing yards to get straggly, and not being actively involved in events that might change the direction and future of the community. These are all things within control of the homeowner and the occupants of the home, not external forces like energy companies.

This should be good news for wind energy, which has been fighting for legitimacy and struggling in many communities with residents who don't want turbines in their back yards. Now, the objections center around aesthestic concerns, which while they may be valid don't carry the same weight as worries about negative impact on property values and human health. Future studies are likely to confirm these results, adding more weight to the argument that it's time to embrace wind.

As a clean source of energy, wind is hard to beat. Professional electricians and others involved in the field of energy production and management know that it's time to turn away from fossil fuels, as do many consumers concerned about living lightly on a planet with crunched resources. Hopefully the results of this study will result in a growth in wind energy, and a decrease in reliance on fossil fuels.