We Tested It: Ways to Cut Bathroom Smells 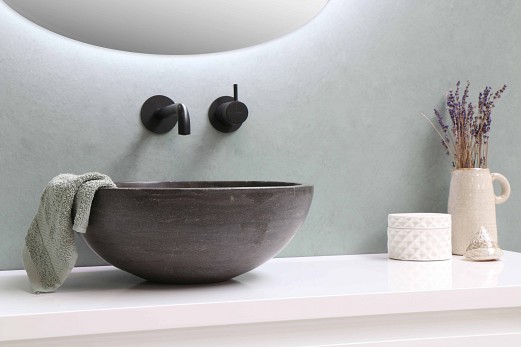 Without going into the biological details, a quick analysis reveals that there are two levels of bathroom de-smelling: Level 1: instant (or if you prefer, emergency) and Level 2: atmospheric. The former needs no explanation. Level 2 deodorizing is an ongoing, often subtle war with common bathroom scents like mustiness, damp towels, stale air and, for some of us, utter neglect in the general cleaning department. For our test, we looked at several easy home solutions and assessed them for both levels of bathroom smell remediation.

Lighting a match, or preferably two, is a reliable remedy for Level 1 situations. It quickly and effectively masks the bathroom odor with a relatively pleasant and familiar smell. It's important to note, however, that it's not the flame that does the trick, it's the smoke (and the sulfurous smell of the ignition). We found that the best approach is to light two matches at once, let them burn for 10 seconds or so, and blow them out. Be sure to run the matches under the faucet before putting them in the trash, to prevent a fire. Don't flush them down the toilet; they could lead to a clog.

Adding a few drops of your favorite essential oil to a cute little bowl of cotton balls is a good standard for Level 2 freshening. You can also use one of those wick devices or any other contraption made for unleashing the power of scented oil. This technique is only modestly effective for Level 1 situations, and it's not worth overdoing the oil to make it work better. As a general tip, stick to floral and citrus oils for the bathroom. This is no place for musk, with its faint animal component, and even herb scents can be risky, due to the association with cooking and food. For some reason the human olfactory response is hard-wired to accept flowers and fruits as clean and welcoming in any environment, especially in bathrooms.

Aside from the incidental effects of starting them with a match, unscented candles have no effect on Level 1 or Level 2 odors. (But they sure can make a bathroom romantic!) Scented candles are a different story. We happened to receive one recently in a gift exchange, so the test was the perfect excuse to use it. My conclusion is that a scented candle is effective for ambient (Level 2) deodorizing, but it comes with two significant drawbacks. First, because the "don't leave burning candles unattended" rule is a very good one, the bathroom is a bad place for candles, since you're often out of the room for hours on end. Second, many people (myself included) feel that a scented candle is a subtle form of torture. Given the choice between, say, a vanilla-scented candle and bathroom odors of any kind, I'm afraid I would have to choose the latter. The difference is that bathroom odors offend your senses, while cheesy scented candles offend your senses and your sensibilities.

We borrowed a can of pricey air "freshener" designed just for this purpose. The scent is supposed to be tangerine, but this did not smell like something you would eat. I won't mention the brand name because it's not fair to disparage a product that works exceedingly well for its intended use. This stuff completely obliterates any Level 1-type smell. But be careful; a heavy spraying can make your bathroom uninhabitable for hours. Our test clearly indicated that even prudent application of scented spray is too strong for Level 2 deodorizing.

Just hear me out on this one, because it's a good trick to know and can save you when other remedies aren't appropriate. If you have forced-air heating and/or air conditioning, you can turn up (or down) the thermostat to kick on the system, thereby circulating—and more importantly, diluting—the bathroom air. Don't worry; it won't stink up the whole house. The best thing is, no one's the wiser, although it might be hard to explain a sudden need for heat in July. Most bathrooms have a supply register but typically do not have a return-air vent, so you have to open the bathroom door for best effect.

A Note about Bathroom Vent Fans

A good vent fan is hands-down the best way to eliminate level 1 bathroom smells and to help prevent level 2 odors, but very few fans can rightly be called "good." Most are too wimpy or too clogged with gross and mysterious fuzz to have much effect, or they're so noisy that you're afraid to use them. In any case, a vent fan must be used properly for good performance. It's best to turn on the fan when you go into the bathroom, so the air is already moving by the time any odors are introduced. When you leave the bathroom, don't shut the door. Instead, leave it ajar (at least a few inches) to provide makeup air for the fan. In order to get rid of the bad air, the fan needs fresh air coming in. Closing the door greatly impedes and slows the cleansing effect by restricting air movement.

Find a reliable contractor for your bathroom plumbing or HVAC needs.