3 Ways to Clean Your Oven Without Chemicals 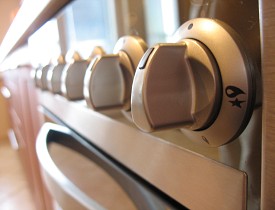 No matter how neat you are, every home cook will occasionally need to clean the oven. Even a self-cleaning oven isn't a self-sweeping oven. It just burns off spilled food at extreme temperatures. The charred remains (and typically some of the stuck spilled food) will still be in the oven.

The typical supermarket cleaning aisle offers an array of expensive special products just for cleaning the oven, likely containing harsh chemicals that may linger and ruin the flavor of your food. Instead of buying one, we tried three DIY oven cleaner recipes. All worked, to varying degrees. For a fair comparison, we split the bottom of the same oven into three sections and cleaned up several months' worth of drips and spills from pies, casseroles and more. Starting with the most effective method, here are our results.

1. Baking soda paste: Martha Stewart suggested cleaning the oven with baking soda and water. We were pleasantly surprised to find it was both the simplest (you don't need to make a macramé cleaning elf or anything) and the most effective way to clean an oven. You simply coat all the oven surfaces with a paste of baking soda and water, then let it work overnight. Presumably to keep your hands spotless for serving hors d'oeuvres, Martha recommends donning gloves and scraping off the resulting grime with a plastic spatula. This takes some muscle, and fails to remove the baking soda residue, so we found an old sponge easier and more effective (albeit messier).

2. Salt, vinegar and heat: The Organic Authority didn't quite live up to its name with its DIY oven cleaner method. The ingredients are certainly organic, but they don't provide an authoritative solution. OA Writer Jill Ettinger suggests turning on the oven to just 125 degrees (she doesn't specify Fahrenheit, but even in Celsius, it would only equal 257 degrees F, still a relatively low oven temperature). Then spray water or vinegar on the oven surface, and sprinkle salt onto any spills and grime. Turn off oven. Once it's cool, wipe out the salt and grime. We used vinegar, and tested it on the right side of the oven floor, which had fewer total spills, but sported a couple of challenging, thick, caked-on globs. The OA method failed to completely clean the worst spots, and the rest of the area required more elbow grease to clear up than with the baking soda method. To be fair, the Organic Authority did suggest a vinegar and baking soda solution for more serious messes, which is pretty similar to Martha's method.

3. Soap and baking soda: Surprisingly, the most complex DIY oven cleaner also was the least effective. Tipnut suggested sprinkling dry baking soda directly onto the oven floor. Then mix three teaspoons of Borax, ¼ cup vinegar and 1/8 cup liquid dish soap with two cups of hot water in a spray bottle, and spray on the baking soda. Leave the mixture overnight, and wipe away. While this seems like it would be at least as useful as the simple baking soda paste, the soapy solution took more effort to scrub away, and left more residue.

We should probably clarify that Networx is in no way sponsored by or affiliated with Arm & Hammer, but we have proven once again that baking soda can clean or deodorize almost anything. In fact, we used generic baking soda for this test -- to great effect. Next time you need to clean the oven, save some money and spare the chemicals. Follow Martha's lead and use a baking soda paste.

If you hire a professional cleaner, talk to them about green cleaning options.