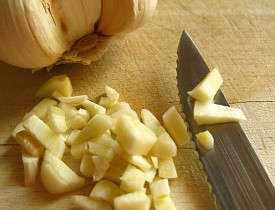 As a foodie, I’ve long since gotten over the conventional fear of garlic. I know how essential it is to so many types of food and that when fully cooked, it seldom creates a breath problem. I even like the lingering smell of garlic after smashing a few cloves with the heel of my hand, Mario Batali-style. That said, I concede that a good lamb kebab or a bad hot dog can leave you with breath that’s no picnic for anyone. So I was happy to test drive a few homespun solutions to this timeless food lover’s problem, knowing full well that even the best performer can be but a temporary masking of the wrath of the pungent bulb.

All of the items for the remedies are available in any ordinary kitchen. This ruled out one commonly noted remedy—cardamom—because few home cooks keep it on hand, as well as all commercial products. I also didn’t mess around with mouthwash, since I know from experience that its effect on garlic is short-lived, as with most other breath problems. All the tested remedies were claimed by numerous sources to be a favorite cure for garlic breath (except one: instant coffee). All were fairly effective at temporarily masking the unpleasantness, but none was able to counteract the lingering taste of raw garlic; only time can heal those wounds.

It’s traditionally believed that: 1) parsley fresh from the garden helps alleviate garlic's power on the breath and 2) that that’s why many foods call for both of these ingredients. But if this were true, wouldn’t parsley accompany garlic in more recipes, sort of like the trusty “u” being paired with the oddball “q” in English? Freshening your breath requires at least a sprig of fresh parley, added to the meal or used as a garnish that’s eaten afterward. The latter does help neutralize the pungency of garlic on the tongue, but mostly because the flavors are complementary. For this reason it’s the most pleasant of the remedies tested, and it does a decent job of masking the odor for a short time.

Chew on a bit of lemon rind or suck the juice out of a meaty slice; take your pick. The good news is either one works pretty well for replacing garlic breath with a lemon scent (lemon works on dirty households, why not on mouths?). As painful as it is to eat pure lemon, this is one of the least unpleasant remedies, flavor-wise, and it’s the hands-down winner at taming the dragon breath.

The August 2010 issue of the Journal of Food Science magazine reports on a test using milk to counteract the odors of garlic ingestion. It found that water played the primary role in deodorizing the “volatile” contents but that whole milk was more effective overall than fat-free milk or water with an additive. The report also recommends mixing garlic with milk for the best deodorant effect. In my far less scientific experiment, I found that drinking milk after eating lots of garlic is slightly sickening, although it did knock the edge off the garlic breath. As for the idea of mixing milk with garlic for anything to be eaten, that sounds like the makings of a grade school prank.

There’s a very good reason why garlicky foods aren’t a traditional part of teatime: the flavor combination is positively wretched. And the deodorizing effect of tea isn’t good enough to justify the cruelty to your palate.

I just had to try this after seeing it on an anonymous—but clearly earnest—blog post. The remedy calls for dropping a half-teaspoon of freeze-dried coffee into your mouth and swishing it around for a few minutes. Then you get to spit it out. Does it work? Yes, it does replace the garlic smell with a strong coffee odor. And the experience? Let’s put it this way: If garlic breath were a crime and this were the only way to mask it, I would either give up garlic altogether or occasionally eat garlic and give up breathing for the next three days. For anyone dying to know what it’s like to lick an ashtray then gargle with motor oil, this is probably the closest safe alternative.