We Tested It: Cleaning with Peanut Butter 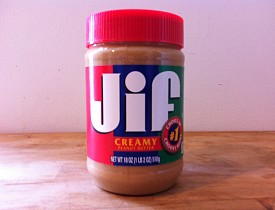 The fact that you can use peanut butter for purposes other than eating is one of those things you’ve probably heard from a "fun fact" person at a terrible party. It usually comes right after they tell you that an avocado is a fruit and a peanut is a legume, but before they inform you that a banana is technically a berry. Rightfully, we all try to ignore this type of person, so most of us have never actually tried any of the alternative uses for peanut butter that they might suggest. To see if our prejudiced unwillingness to heed annoying peanut butter advice is warranted or not, I tested a few alternative uses. Let’s begin, though, with one use I didn’t test.

Everyone has heard that peanut butter can help get chewing gum out of your hair. That may or may not be true. But what I can tell you is absolutely true is that peanut butter does not at all help get Silly Putty out of your hair. When I was 12 years old, I tried spreading Silly Putty over my head to see if I could imprint it with the crosshatch pattern of my individual hair strands. It worked the first time, but the second time it just got completely interwoven onto my scalp. Having heard about peanut butter as a gum remover, I gave it a shot on the Silly Putty. It not only failed to remove the Silly Putty, but also coated my hair with oil. My shampoo wouldn’t lather up for the following six weeks. Not wanting to relive that childhood trauma, I skipped the peanut butter-in-your-hair-test. I hope you understand.

As for the well-known trick of using peanut butter to bait mousetraps, that actually works. Living in a number of different apartments in Boston and New York City, I have had mouse issues here and there. Baiting a trap with peanut butter has always seemed to work about as well as cheese, but has the added benefit of not getting crusty and gross. Not that it really matters if the cheese gets crusty and gross – you’re not looking for the mouse to have a really good time with it – but it’s disconcerting to know there’s a deteriorating hunk of dairy behind your side table. Peanut butter just seems less off-putting.

Moving on to lesser-known alternative uses for peanut butter, there's a rumor that you can use it to shave. Not willing to try this out on my face, I tried it on my leg. I applied the peanut butter with a knife because it felt classier than sticking my fingers directly into the jar. 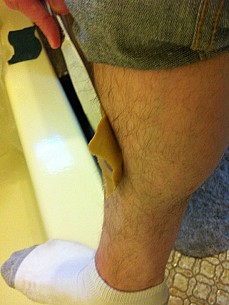 Technically, it worked. It served as a lubricant and kept the razor from leaving a rash or cutting me. But, some claim it works just as well as any store-bought shaving cream or gel. This isn’t true at all. The peanut butter clogs up the razor and takes a great deal of time to rinse off the blades. It also leaves your skin incredibly greasy. And sometimes afterward, when you have to go write an article in a coffee shop, you feel self-conscious that you might still smell like peanut butter. Choosy moms don’t choose to let their kids shave with peanut butter. 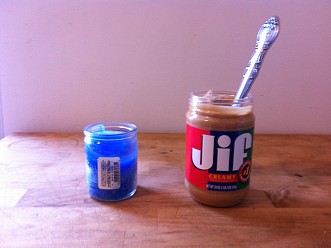 You might have also heard that peanut butter can help to remove sticker residue left behind by price tags. I tried this on a candle I had bought from a dollar store in preparation for the Great New York Hurricane of 2011 (that I slept through entirely).

It worked impressively well. Actually, of all the food products I have tested for alternative uses, this worked the best. After peeling off the first layer of the sticker, I rubbed peanut butter on all the left-behind glue and paper lint. With some light scraping, using my mostly-bitten-off nails, all the residue readily separated from the glass. After washing off the peanut butter, I actually had to refer to the previous picture to see where on the candle the sticker used to be so I could get an accurately aligned “after” shot.

If peanut butter can help deal with the adhesive properties of a price sticker, it's plausible that it would work on the aforementioned gum-in-the-hair as well. Still, prevention seems like the better way to go when dealing with chewed gum somehow getting stuck to your head. The same for baiting mousetraps. We should all probably be taking out our trash more often. And nobody ought to be shaving with peanut butter. So, maybe let’s all stick with just eating peanut butter like a normal person and using it occasionally for sticker removal. We were mostly right in our dismissal of the “cool facts” guy at the terrible party.