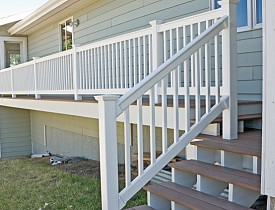 Around Old Faithful and other landmarks, Yellowstone National Park has installed attractive, durable composite decks made primarily from recycled plastic grocery bags and soda bottles. These faux wood decks and rails are designed to withstand many years of intense heat and heavy traffic — conditions that quickly damaged earlier hardwood decks and rails. The new composite decks are a sustainable, high-quality alternative to hardwoods.

Wood can warp, split, rot and suffer termite damage. Synthetic alternatives avoid these problems, but they are often more expensive than wood and they may have other drawbacks. Here is a basic primer on vinyl and composite deck railings.

Pre-formed PVC (polyvinyl chloride) railings are tough, durable and virtually maintenance-free. They are more expensive than standard wood railings, but they can be expected to last longer, and survive harsher conditions. They also are easier to install than wood decking or even some composites. They are typically designed to attach to the deck with hidden screws.

Vinyl railings are generally not as attractive as wood railings, but they are becoming available in more colors and styles beyond the standard white rectangular tubes.

A newer alternative, used around Old Faithful, is something of a hybrid. In most composites, plastic is mixed with wood fibers to create prefabricated railings that look like wood but won’t rot, warp, split or succumb to insects.

The dozens of composite deck railing products on the market have varying results in the aesthetics department. Some will fool nearly everybody while others are as fake as a “Star Trek” space rock. Likewise, some railings have a similar density to real wood, so they can be cut and finished, unlike vinyl railings.

Composite decking is a leading use of recycled plastic. Polyethylene, including recycled grocery bags and milk jugs, is the most common type of plastic in composite deck railings. It is available in a wide range of colors and textures.

Polypropylene is less common and available in fewer varieties. It is a denser and stronger plastic that is less likely to contain recycled content. However, it is stronger and more durable than polyethylene.

Some composites attach with exposed screws and nails, but hidden screw systems are usually preferable because you don’t have to worry about rust stains around the fasteners.

Vinyl and composite deck railings are more expensive than wood, but can be expected to last far longer. Therefore, in the long run, they may be cheaper. They still can’t quite match the aesthetics of a real wood deck, but they do offer many years of termite- and splinter-free use.

Find a pro to install or replace deck railings for you, in your choice of material.