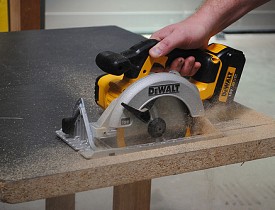 In terms of versatility, the circular saw is king among power saws, but it's also jack of all trades, master of none. It can make rip cuts, crosscuts, notches, bevels, and miters in almost any size or type of material, but it generally can't promise a high degree of accuracy or repeatability. Pros rely on circular saws for fast framing cuts or to go where other saws can't, like when they're trimming decking that's already installed or notching out a stair stringer. If your home shop doesn't include a table saw, the circular saw also fills in for all rip cuts and bevels. The following tips cover several of the most common circular saw functions, whether it's the best tool for the job or not (because for some of us it's the only tool for the job).

This is a very straightforward tool, so there isn't much to work out in terms of identifying parts and their functions. We just need to make it clear that here we're calling the big metal plate that rides along the wood the "base." Some people call it a foot; to others it's a table or a baseplate. Same thing. It's the part that you move up and down to adjust the cutting depth, or you tilt it side-to-side to adjust the blade angle.

Sighting Along the Blade

Now that we know what the base is, let's talk about the little notch (or notches) at the front edge of the base, there to help you align the blade with your cutting line as you push the saw through the cut. There are a few problems with this system:

You can use the base notch to guide rough cuts, but for much better accuracy, watch the blade itself as it travels down the cutting line. If you're right-handed and have a standard sidewinder saw (blade on the right side of the motor, when viewed from the rear), watching the blade requires leaning over the saw a bit, and sometimes getting dust and chips in the face. That's why you always wear safety glasses. With a worm-drive saw (blade to the left of the motor), the blade is more visible from the left side during a cut, a clear advantage for righthanders. With either type, sometimes you have to watch the less-visible side of the blade, and you do this by looking, more or less, at the front of the blade or through the little space at the front of the motor. Don't forget those safety glasses.

The most reliable way to make long rip cuts (with the wood grain) or crosscuts (across the grain) is by clamping a straightedge to your workpiece and having the saw base ride along the straightedge. Make a jig for this using a base piece of thin plywood or hardboard and fastening a straight board to the base. Then, run the saw down the jig with the saw base against the board, cutting off the plywood base a couple of inches from the board (depending on your saw design). To use the jig, set the plywood edge on your cutting line; that's where the saw will cut.

However, unless the guide board is dead straight and perfectly smooth, this kind of straightedge can produce imperfect cuts. So for any cuts up to about 50 inches, a 4-foot level is a better straightedge. This requires clamping your straightedge away from the cutting line at precisely the same distance between where the blade cuts and the side edge of the saw base, which can take a couple of test cuts to get it just right. A steel ruler or a machinist's rule helps with setup (and a lot of other marking tasks).

"Speed® Square" is actually a brand name, which is used as the standard term for the pouch-size right-triangle squares that have a flange (or lip) along one edge and are handy for marking 90° and 45° lines, as well as a full range of other angles (usually for rafter cuts). These squares also make great straightedge guides for circular saws, perfect for cutting studs and other smallish lumber to length. Simply mark your cutting line with the square, then position your saw at the line. Set the square on the board so the flange is tight up against its front or back edge (your preference) and slide the square over so it butts against the side of the saw base. Fine-tune the position of the saw and square, then hold the square firmly in place and make the cut, keeping the saw base riding along the edge of the square.

Guiding With a Pinch

For quick rip cuts that don't have to be perfect, there's no need to make a full-length chalk or pencil line. Instead, mark the width of the cut at the starting end of your workpiece, position the saw so the blade is on the line, then use your non-trigger hand to pinch the saw base between your thumb and forefinger, with the nail of your forefinger snug against the edge of the workpiece. As you push the saw through the cut, your nail rides along the wood's edge to keep it on track.

This is a classic trim carpenter's trick for making interior cutouts in paneling and other sheet material, such as rectangular holes for electrical outlets. It takes a little practice to perfect, but using it will clearly demonstrate to any onlookers that you've taken your tool skills to another level.

To make a plunge cut, retract the saw's safety guard, and position the front edge of the saw base on the workpiece, tilting the saw so the blade is above the cutting line but not touching the material. Start the saw and let it come to full speed, then slowly pivot it down so the blade cuts into the workpiece, much like a chop saw or miter saw. Keep your eye on both the front and back of the blade because it's cutting in both directions at once, making it easy to overcut. If the cut is long, pivot the saw all the way down so the base is flat on the work, then move the saw forward, as usual, to complete the cut. You can also go backward just a bit before going forward, but do this with extra caution.

At the end of the cut, carefully tilt the saw up again, pivoting on the front edge of the base as before, to retract the blade from the work. For short cuts, you'll usually keep the guard retracted and the saw running throughout each cut, but on long cuts, you can release the guard once the base is on the wood, and you can stop moving the saw at the end of the cut and release the trigger to let the blade wind down to a stop before pulling it out of the work, if desired.

SAFETY NOTE: Remember that circular saws force themselves backward (towards you!) during the cut. With the saw guard retracted, there's nothing between the spinning blade and anything in its path to the rear, so keep a firm grip on the saw and always stand to the side of the saw, especially during a plunge cut.

Want to leave the cutting to a pro? Find a reliable professional carpenter for the job.