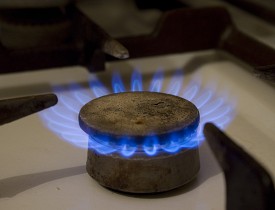 In addition to cooking performance that’s vastly superior to that of electric stoves, good old gas stoves and cooktops tend to be very easy to fix. Usually the problem is gunk—mostly from spillovers and combustion byproducts—that clogs the tiny ports and other parts supplying the burners. Relatively modern gas stoves also have a few electrical parts that can fail but should be easy to replace.

For repair purposes, there are three main types of gas stoves:

Standing pilot. Standing pilot models are old and typically have no electrical parts. Their burners are ignited by one or more small flames that burn continuously under the cooktop lid.

Standard electric igniter. Stoves with electric igniters include many older models with standard (unsealed) burners. With these and standing pilot stoves, access the working parts by removing the burner grates and lifting up the cooktop lid; most are hinged at the back and have a metal prop stick, just like a car hood.

Sealed burner. Newer stoves with sealed burners also have electric igniters, but you can’t lift the lid on these, and each burner has its own igniter that comes up through the lid. Electric igniter stoves make a faint clicking sound when you turn the burner dial to LIGHT.

Troubleshoot a Burner that Doesn’t Fire Up

This is the most common problem with gas stoves, and it’s usually caused by gunk fouling the igniter or clogging a standing pilot. It can also be caused by a clogged burner assembly, a failed igniter switch or a bad module. The first step (detailed below) is to clean the igniter or pilot and make sure it’s working; if so, clean the burner next. If an igniter doesn’t work after cleaning, test for a bad igniter switch and module, as applicable.

Clean the Igniter or Pilot

On a standard electric igniter stove, lift the cooktop lid and locate the igniters (they somewhat resemble and work like the spark end of a spark plug). Clean the igniter tips and metal grounds with an old toothbrush to remove buildup. On sealed-burner models, locate the offending igniter next to its burner, and clean it carefully with a toothbrush. Turn on the burner to test the igniter. It will click and spark if it’s working.

On standing pilot models, lift the lid and locate the pilot orifice—a small hole usually located between two or more burner tubes. Carefully clean the orifice by picking out buildup with a sewing needle, then relight the pilot with a match or lighter.

Test an Igniter Switch and Module

A couple of quick tests can usually tell you whether you have a failed burner switch or module, which is linked to all of the switches. To test a switch, simultaneously turn on both a good burner and the burner that won’t light; if the bad burner starts up, it probably has a failed switch. If more than one burner is malfunctioning, test the module: Try to light each burner for a few seconds, listening and looking for the spark of the igniter; if nothing happens with any of the burners, you probably have a bad module. You can replace a failed switch or module with a matching part from the stove’s manufacturer or an aftermarket supplier. Consult your owner’s manual for repair procedures.

Would you prefer to have a professional troubleshoot and repair your gas stove problems? Hire a reliable handyman.