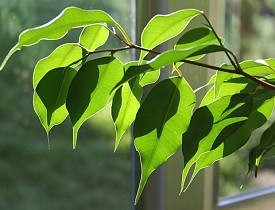 Most people spend a majority of their time indoors in increasingly well-sealed buildings surrounded by paints and other synthetic materials which off-gas noxious chemicals. These conditions are related to increasing incidences of asthma, allergies, and cancer. Indeed, indoor air quality can be much more polluted than outdoor air, up to tenfold.

When “sick building syndrome” was first becoming recognized as a growing problem, NASA conducted a study of various house plants and their effectiveness at filtering out hazardous chemicals from the air. Their findings? Numerous of the plants were highly effective at removing hazardous chemicals from the air. Not only that, but they can regulate humidity as well. They are also much less expensive than air purifying machines or humidifiers.

The following are the top ten indoor plants, as rated for ease of maintenance and effectiveness at purifying the air, summarized from NASA's studies.

The best performer at removing airborne toxins, it also releases moisture into the air to regulate humidity, and is attractive to look at. It's also effective at removing salt from soil. It is easy to take care of and very resistant to pests. Enjoys semi-sun, temperatures between 65-75 degrees.

The lady palm is easy to care for as it is very resistant to pests and grows slowly. Enjoys semi-sun and room temp of 60-70 degrees, and never lower than 50 degrees during the winter.

The bamboo palm can grow to 6 feet and is more resistant to pests than the areca palm. It is also even more effective than both the areca and the lady palm at removing airborne chemicals. Also an excellent humidifier. Enjoys semi-sun and 60-75 degree temperatures, and not less than 50 degrees.

The rubber plant, named for the appearance of its leaves, is known as a plant which needs little light and tolerates lower temperatures than the previously ones. It's especially effective at removing the ubiquitous chemical formaldehyde from the air. It can grow to 8 ft. Enjoys semi-sun to semi-shade and 60-80 degree temperatures, and as low as 40 degrees for short periods.

This plant is one of the most effective at removing trichloroethylene, a chemical commonly emitted by photocopiers and similar devices, from the air. While the standard variety can grow to 10 ft., the smaller “Compacta” variety reaches only 1-3 ft. and requires less maintenance. Enjoys semi-shade (even poorly lit areas) and 60-75 degree temperatures, and not less than 50 degrees.

English Ivy grows well in hanging baskets. It can benefit from some time spent outdoors in the spring or summer. It is especially good at removing formaldehyde from the air. Enjoys semi-sun to semi-shade and 60-70 degrees temperatures, 50-60 degrees at night.

The dwarf date palm can reach a maximum height of about 6 ft. and grows slowly. It thrives without much light and can survive for decades. It is very effective at removing xylene from the air, which can come from caulking, adhesives, floor coverings, wall coverings, paints, and particle board. Enjoys 60-75 degrees temperatures, but not below 50 degrees.

You can find ficus alii grown three ways: one solitary plant, a bush (with multiple stems from one pot), and braided (with multiple stems intertwined). These plants may molt some of their leaves until they adapt to a new space. Enjoys 60-75 degree temperatures, and 55-68 at nights.

The Boston fern, which grows lush foliage but does not flower, is best grown in a hanging basket or on a pedestal. It is highly effective at removing chemicals and humidifying, but requires a bit more attention than the previous plants -- good for experienced gardeners. It should be misted regularly. Enjoys 65-75 degrees, and 50-65 at night.

I know, cute name, right? It boasts white shell-like flowers reminiscent of the more common calla lily and is one of a handful of plants that successfully bloom indoors. Aesthetically pleasing, easy to take care of, and excellent at removing chemicals... what more could you ask for? Enjoys 60-75 degrees temperatures, and 55-68 at night.