What to Do if Your Toilet Won't Flush 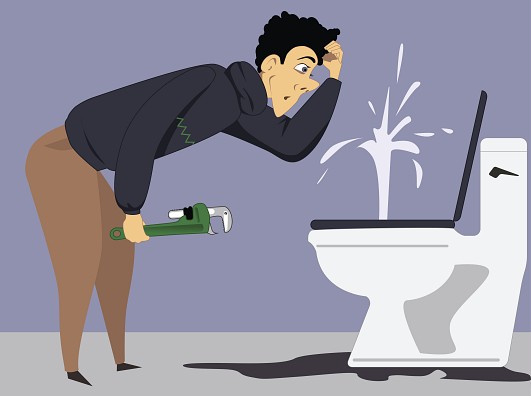 Not to sound too dramatic, but have you ever been overcome with terror because you just used the bathroom and now the toilet won't flush? Of course you have, you're human. But despite that past trauma, you still rely heavily on your toilet. You trust that your toilet will always be there for you and that it will work properly when you're finished with it...until it doesn't and you're left feeling shattered all over again. As far as relationships with inanimate objects go, your relationship with your toilet is as dysfunctional as it gets.

Maybe that was a little too dramatic. But the point is, it can be stressful when the toilet won't flush and nobody should ever have to feel that way. By knowing what causes a toilet not to work properly and how you can fix it, you'll stay calm even when the toilet isn't.

How a toilet works

A toilet consists of two main components: the tank and the bowl. The tank houses the flush/refill mechanism and about 2 gallons of water. You know about the bowl of course, but the hole at the bottom is connected to a siphon tube. The siphon tube curves up and then down (illustration). If you would pour a cup or two of water into the bowl, nothing would happen because the added water wouldn't be enough to clear the upward curve of the siphon tube. It's only when the bowl is flooded with a couple of gallons of water at once, that the water will flow over the upward curve of the siphon tube and flush everything from the bowl into the sewer pipe.

As for how the flush/refill mechanism works, I'll quote notable home improvement writer and long-time Networx contributor, Philip Schmidt, from his excellent article about troubleshooting your toilet's flushing mechanism:

"A toilet's flush action is powered by three things: 1) water pressure, 2) gravity, and 3) you, the Flush Master. The big tank at the back is full of water, and it's elevated above the bowl. When the Flush Master activates the handle, it pulls on a chain inside the tank, which in turn lifts a little rubber trap door (called a flapper). This lets the water in the tank rush down through a big hole and into the bowl, creating the familiar swirling action and, ultimately, the flush that empties the bowl. When the tank is empty, the flapper drops back down over the hole. Meanwhile, a float that's attached to the flush-and-fill valve (also called a 'ballcock') has dropped with the exiting water, triggering the valve to open and refill the tank. The float rides atop the rising water and shuts off the valve at the preset level."

Diagnose and fix the issue

It may seem as if there are a lot of moving parts involved in flushing the toilet, but it's really not that complicated. First, you need to determine why the toilet isn't flushing. It's an issue with either the flush mechanism or the drainage system. In both cases, you'll know right away where the issue is. If you press the flush handle and it doesn't do what it's supposed to, the flush mechanism is the problem. If you press the flush handle and everything works properly up until the part where the contents of the bowl flushes away, then the issue is the drainage system.

Most of the time, a toilet won't flush properly because there's something wrong with the flush mechanism. For that, I'll refer you again to Philip Schmidt's article. He talks about every conceivable mishap that could possibly plague a flush mechanism and how you can easily fix it yourself for cheap.

If the toilet won't flush because of a drainage issue, there are several things you can do. First, if the contents of the bowl are rising and getting dangerously close to the rim, you'll need to move quickly to avoid overflow. Remove the lid of the tank and seal the hole at the bottom of the tank with the flapper. This will stop more water from entering the bowl.

So you've got a bowl full of unpleasantness and it's not going anywhere. What now? Grab a flange plunger (pictured) and roll up your sleeves. The flange that extends from the cup of the plunger was designed to fit snugly into the drain of a toilet for maximum suction. Insert the flange into the drain. Thrust the handle of the plunger straight down as much as possible, then yank the handle back. Repeat this motion a few times, then flush the toilet. If it still doesn't flush, repeat the plunging process. If the toilet is still clogged after a couple of plunging attempts, you'll need to try something more invasive - the closet auger.

The closet auger, also known as the toilet auger, is one of the most practical, money-saving tools you can own. A 6-foot auger is recommended and is relatively inexpensive (approximately $50). A toilet auger has a crank handle on one end and a flexible cable with an auger head on the other end. Insert the auger head into the drain and feed the cable further into the drain by cranking the handle and pushing down on it. The degree of force you'll need will depend on how severe the blockage. Keep cranking the handle even after you've broken through the clog to make sure you completely clear the blockage. You should be able to flush the toilet now.

If you don't have a plunger or auger on hand and you're unable to get to the store, don't call a plumber just yet - there are a couple of other things you can try.

Believe it or not, you can wait it out. It sounds simple, but often works. In most cases, toilets get clogged because there was too much paper. Given some time, the weight of the water might work through the clog on its own. Let it sit for a night and try flushing when you wake up. Hopefully, in this case, good things will come to those who wait.

If you only have one toilet and would rather not wait it out, try pouring some hot water into the bowl to help loosen things up. Wait 15 minutes and flush again. (A cup or two will do - too much hot water may crack the toilet or ruin the piping.) You can also try pouring some soap into the toilet. Apparently, soap acts as a decomposing agent and can effectively attack waste. Wait 15 minutes and flush again.

When all else fails

Hopefully, your toilet is back in working order and you now know what to do the next time your toilet decides to betray you. However, if you've tried everything and the toilet still won't flush, there may be a blockage deep in the sewer line and it might be time to contact a professional.