Tips for Finding the Right Roommate 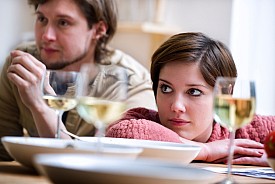 Roommates are hard to find. Let me rephrase that. Good roommates are hard to find. It is very easy to find people who are renting out rooms in apartments. It is tempting to just take one of those rooms, just to get out of whatever crummy living situation you are in. It is possible to give the potential roommates the "good eye", the benefit of the doubt, to treat them like you'd want to be treated. I'll tell you why not.

Straight out of college, I was desperate to move out of my parents' house and into the city. I found a room in an apartment in a building that a friend of mine lived in. She lived upstairs, and since I had been in that building a few times, I thought the roommates were somehow vouched for. Also, I knew someone else who lived in the building, the bass player in a band that I went to see frequently. And on top of everything, an actual friend of mine had lived in that very apartment, with one of the roommates.

Now this friend of mine said to me, "He's a nice guy, but he doesn't lock the door. My camera got stolen because someone came in the back door." He had swiftly moved out after the theft of his camera. Did I take this as a warning? No. "I don't really have anything valuable," I said, and took the available room.

At first the roommate was OK. We got along well, and I shared a lot with him. The problem was, he didn't really share with me. I came home from work one night looking forward to eating leftovers, and he said, "I ate your leftovers. I hope you don't mind." Then he started asking me to babysit for his daughter while she was in his custody. For free. Then he started leaving the doors unlocked, and when I asked him to lock the doors, he refused to lock them. And then the electric bill came. Guess who didn't want to pay the electric bill? My roommate. Guess who paid it? I did. When I confronted him about it, he tacked the electric bill to my door post with a kitchen knife. Oh, wait. Did I tell you that he would log on to my computer and look at SPAM-y, tawdry Websites, because he had given his own computer a virus so bad that it no longer functioned?

Boys and girls, when you need to find a roommate, do not repeat the mistakes that I made in my first year out of college. Even though the landlord desperately needed to call a Boston flooring contractor to fix the sagging and splintering floor, he didn't. Why? Because the building was a dump. I wanted to live in a hip neighborhood, but all I could afford was a room in a dump. So that's rule number one: Don't move into a place that is obviously a dump. If one of your potential roommates has been living in this dump for a long time and has never seen the need to ask the landlord to fix it up, take that as a red flag. Is the place cluttered with your potential roommate's stuff? Does the bathroom plumbing desperately need a plumber to stop it from leaking? If the apartment is clearly in disrepair, and the potential roommate (whose name is on the lease) has been living in bad conditions for a while, take that as a sign that he doesn't respect himself, and probably won't respect you.

My next tip for finding the right roommate, based on my own failures and successes with roommates, is to clearly go over the utility and rent bills, as well as the lease, before moving in. That crummy roommate? He was making money off of my room. His name was on the lease; he sent the check to the landlord every month. The other girl who lived there and I payed him in cash. It turns out, he was subsidizing his own rent with our rent, without telling us. Avoid problems like that by asking the potential roommate to see records of utility bills, as well as the lease. If he balks or gives you an attitude about it, or if he claims not to even keep those records, do not move in. On the flip side, a good roommate will happily show you records of utility and rent payments, and will be straight and up-front with you about all financial matters.

My third and last tip for finding the right roommate for you is to choose stability over fun. Does your potential roommate look boring? Boring is good. Boring pays the bills. Boring doesn't get into screaming matches with his girlfriend. Boring doesn't suddenly start smoking in the house, or randomly get a dog who pees on the floor. When faced with a choice between moving into an apartment with "cool" roommates in a "cool" neighborhood, versus boring roommates in a slightly sleepier neighborhood, you will be happier in the end with the boring roommates. They will lock the doors. They will split the bills with you. They will sleep at night and work during the day.

Okay, my recent college graduates? Good luck scanning Craigslist for your first post-college apartment. Please, for the love of everything good and holy, heed my advice. Don't make the same mistakes that I did.