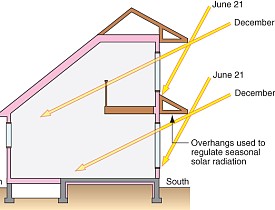 People have been talking about passive solar buildings for a long time, although there have been surprisingly few actually built during that time. In the 1970’s and early 1980’s (around the time of the first energy crisis), passive solar design began to emerge and many architects and builders experimented with it, with varying degrees of success.

Get the details right

The basic principles are pretty straightforward, but the challenge is getting all the details right. Probably the biggest issue is finding the right combination of windows to let the sun’s energy in and thermal mass to store that energy. Thermal mass in passive solar homes can be concrete or tile floors, concrete walls, and large tanks of water. The important element in thermal mass is that sunrays must be able to hit the mass, either directly or indirectly, to heat it up. If it's covered with carpet, wood, or in the case of insulated concrete forms (ICFs), insulation, it won’t be able to absorb enough heat to work.

Thermal mass serves two purposes -– capturing and releasing heat energy from the sun. It soaks up heat during the day, helping to keep a home from overheating, then when the sun and the temperature start to go down, it releases that heat into the house, keeping it warm overnight, and often during cloudy days.

How much thermal mass to install?

The big question in passive solar design is exactly how much thermal mass to install. The amount is determined by the total area of south-facing windows. If there is too little mass, not enough heat will be absorbed, allowing the house to overheat during the day and not releasing enough stored heat at night. There is less of a risk putting in too much thermal mass, but it is pretty expensive stuff, so you want to avoid overdoing it, unless you like to waste a lot of money on things you can’t see.

Some rules of thumb to consider: If your south-facing window area is less than 7% of the floor area of the house, you won’t need any extra thermal mass (but you won’t be getting much passive solar heating when the sun goes down). For every square foot (SF) of south-facing glass over that 7%, you need about 5½ SF of 4” thick floor mass, such as a concrete slab. If you are going to use your walls for the mass, then you need to have about 8 SF of 4” thick material. Remember that the mass needs to be exposed and not covered with carpet or similar finishes to work properly.   The mass-to-window ratios can vary based on the climate and building features.

One key to good passive solar design is to plan a house that has windows and thermal mass in all the major rooms. If you don’t, then you have to figure out a way to circulate the heat into rooms that aren’t heated by the sun. Also, keep in mind that most people want cooling and dehumidification in their homes during warm weather, so even with passive solar heating, you may still need some air conditioning to keep the house comfortable in a hot climate like Atlanta.

On one level, passive solar design is a bit of a misnomer. It's passive in the sense that it doesn’t use fluids and pumps, ducts and blowers, or other mechanical equipment to heat the house. However, it is anything but passive for the homeowners, who need to be very active about opening and closing blinds to let heat in during the day and keep it from flowing out through the windows at night. Interior doors must be opened and closed to let heat flow through the entire house. Some HVAC systems in passive solar houses even include ducts and fans to circulate heat throughout the entire house. Homeowners also need to open windows when the weather is temperate to take advantage of natural heating and cooling when available.

Passive solar design is not for everyone, but for those people who understand it and are willing to live actively in one of these homes, they can be very comfortable and extremely efficient.