The Science of Christmas Lights 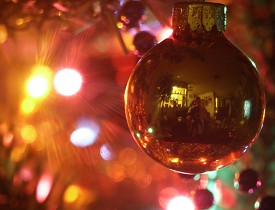 Christmas lights are the most recognizable sign of the season. These lights seem to warm up the coldest of December nights and give a nostalgic glow to the home. Even though we are so familiar with Christmas lights, there is a bit of background science that can give you the edge to your holiday cheer.

First, let’s cover some important terms. You’ve all heard the words "voltage" and "current," but the difference between the two might be slipping through your fingers. Voltage is the electrical energy that you can use between two parts of a circuit and current is the amount of electrons flowing through a wire. In circuits, the current needs a material to flow the electrons through. The circuit’s material will determine to what extent the current will be able to run. (See Footnote 1)

In every house in the US, the voltage that you get is a constant 120V.(2) When you plug in your Christmas lights, it’s only the current that changes. The more light bulbs you have on the string, the more current you’re going to suck out of your wall socket.(1,3)

Bulbs heat up metal to produce light. However, with any material, there is a point where current becomes too much and the material breaks down. When this happens in a bulb, the metal stops glowing and the bulb burns out.(4) In a wire, it can cause a fire.(5) Thank G-d for circuit breakers! After the connection reaches about twenty units of current (Amperes or “A”), the circuit breaker will shut it down.(6,7,8)

Two ways to set up lights in a circuit

There are 2 ways to set up lights in a circuit: in series or in parallel. A series circuit has bulbs set up one after another on a wire. A parallel circuit looks like a ladder with the bulbs in the middle of each rung. In series, the current has to account for every bulb on the line, while in parallel, the current powers each bulb separately, because each has its own string of wire.(9,10) Parallel circuits therefore are brighter and use less current than series circuits (if the bulbs are the same size).(11) Series circuits also need each bulb to complete the circuit, hence the mantra “if one goes out they all do.” However, manufacturers now add a metal ring called a “shunt resistor” around the wires in the bulb that bypasses the heating metal when it breaks down.(12)

In any event, the amount of energy given off by the bulbs, in watts, is the same.(13) Different types of bulbs have varying degrees of efficiency, but overall, heating an object until it glows isn’t the most conservation-friendly practice out there.(14) If you are very environmentally conscious, LED use less energy and are a bit safer than incandescent. Instead of heating up metal, the semiconductors inside them turn electricity into a single color of light.(15,4) However, they don’t shine as bright and don’t have the same “flame color” as incandescent bulbs.(16)