The Peculiar History of the Toilet 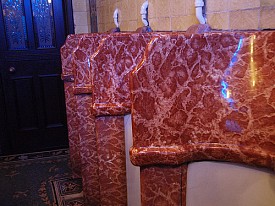 Mention the unmentionable -- toilets and the, um, urgent function thereof -- to the average person and you’re likely to provoke a flushed face and a nervous giggle. Should you continue the conversation by asking about the type of toilets used in ancient times, the response will probably be: “A hole in the ground.” (If you test this on your co-workers, try not to pop the question until after lunch.)

The general population, usually so enamored of facts and figures of every description, is woefully ignorant about this subject, which actually figures pretty prominently in their daily life -- that is, if they live in the Western world. It’s time for some serious education. So without further ado, let us plumb the depths of the fascinating history of toilets.

What may well be the earliest toilets known to humankind are small cells attached to homes in a ruined settlement in the Orkney Islands, believed to date back over 40,000 years. The Indus Valley civilization also had an impressive sewage and water supply system, dating to approximately 20,000 BCE. Moving right along, the first clearly identifiable latrines, built about 1700 BCE, were found at Crete’s Palace of Knossos in the form of shallow earthenware vessels hooked up to a relatively sophisticated water supply. Various other plumbing “systems” were implemented over the next thousand years, from pit toilets and chamber pots to sewage drains -- either aboveground or more discreetly, and more hygienically, underground.

It is really the Ancient Romans, though, who used their engineering ability and concern for sanitation to advance the cause of toilets. Recognizing the importance of separating human waste from the drinking water system to prevent disease, they built 144 communal (!) public toilets. (This tradition lives on, as an image from Sochi testifies.)

The following millennium or two did not bring much headway for toilets in the Western world beyond chamber pots, communal privies and, for the nobility, garderobes -- small private rooms with an opening strategically positioned over a moat. Finally, toward the end of the 16th century, the forerunner of today’s plumbing system was invented -- a cistern with a valve that flushed water through a small pipe. Notable developments over the next few hundred years were the odor-controlling S-shaped pipe and the bathroom fixture showroom, pioneered by the unforgettably named Thomas Crapper.

The real toilet revolution occurred in the 1900s. This halcyon age saw the development of toilet paper rolls, flushable valves and toilet tanks directly atop the toilet bowl. As the 20th century came to a close, environmental awareness gave birth to many new types of toilet: low-flow, dual flush, tankless, waterless and composting. (So far there is no model which takes out the recycling.)

This combination of improved sanitation and green technology is commendable. However, many users are much more impressed by today’s trends in toilet luxury. If you're getting ready for a New York bathroom remodel, you'd better start thinking about your toilet options!

Automated hands-free flushing systems have become standard issue in many North American public restrooms. For at-home use, temperature- and pressure-controlled personal cleansing sprays, with optional massage feature, are followed by a warm air drying system which may well give toilet paper a run for its money.

The latest inventions leave those luxuries far behind. For true 21st century toilet technology, you’ll need a computerized toilet. When you install one of these in your Bathroom of Tomorrow, it will automatically lift the lid for you, play your favorite classical music, purify the air, light up your life with a nightlight or illuminated seat,  analyze your...um, output (input?) for hormonal and nutritional levels and swing out a 21” computer monitor to let you be more productive while you’re producing

But the most awe-inspiring toilets of all are the special models encrusted with Swarovski crystals or plated with real gold. They may well leave you speechless, except for one question: “Who do I call to install and repair that beauty -- a plumber or a jeweler?”