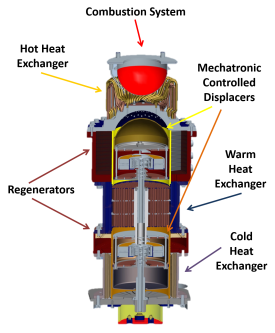 What's the biggest energy-consuming system in the average American home? Heating and cooling, of course. These account for approximately half of residential energy usage -- and the corresponding utility bills. Add your water heater and the figure rises to 70 percent. While it's certainly possible (and praiseworthy) to save energy by adjusting the thermostat, a more effective solution would be an HVAC system that uses less energy in and of itself. I recently talked to Jonathan Haas and Christina Convey of ThermoLift, a team which is developing a new type of heat pump to do just that. Here's what they say about the technology that stands to revolutionize the way we heat and cool our homes.

Heat pumps are a highly effective way of delivering energy. However, a major setback is that they don't really work well in cold climates. Because they're electrically driven, their coils freeze at low temperatures. For the most part, heat pumps are currently used for cooling, which is delivered through electricity derived from the burning of coal or natural gas. By the time the electricity reaches your home, around two-thirds of that energy has been lost, most of it at the plant but also in transmission.

What we're doing at ThermoLift is developing a much more efficient, thermally-driven heat pump, which works as well in cold climates as in more moderate ones. It's still in the development stage; we have grants with the Department of Energy and NYSERDA (New York State Energy Research and Development Authority). Although we're very optimistic and we've gotten a lot of traction, there's a lot of work that to be done before we're actually able to get to market.

A major benefit is that it's a 3-in-one system -- heating, cooling, and hot water in one machine. With our system, we're looking at a 30 to 50 percent reduction in energy use and also reductions in energy cost.

Our heat pump is a closed system. It burns natural gas -- although it's fuel-agnostic and could run on propane, bio-fuels, or even a concentrated solar dish if you could get it hot enough. The system ends up having an increase in temperature and pressure at the top, and at the bottom, there's a decrease in temperature and pressure. The result is like an aerosol can when you press on it; it gets very cold. Therefore, we're able to use that as a heat sink. In winter, when it's cold outside, we use the outside temperature as a heat sink and eventually gain heat from that reservoir. In the summertime, that cycle is reversed, and we use the house as a heat reservoir.

Let's say it's 50 degrees outside and the cold chamber is -50; there's a 100-degree heat sink, heat which we're able to capture in our machine. Similarly, if it's zero degrees and our bottom chamber is -50, we've got a 50-degree heat sink. So even in cold temperatures, we're able to extract heat. In summer, you just reverse the cycle. Instead of pulling heat from outside, you pull heat from inside the building and you deliver it to, for example, hot water or heating a swimming pool. That's, in a nutshell, the thermodynamic workings of the machine.

Our system is based on a prototype with proven performance characteristics. For heating, it shows a COP (coefficient of performance) of 1.45 at 43 degrees and 1.3 at -13 degrees Fahrenheit. That's the amount of energy you get out of the system over the amount you put in. The way our system is able to get that extra heat is by burning natural gas, not only to produce heat, but also using that heat to do work. Compare that to the highest-rated traditional heating systems -- gas furnaces -- with a COP of around .96 to .98.

The ThermoLift heat pump is going to be both for new construction and retrofit. In new construction, the cost savings are upfront. Instead of buying 3 separate systems for heating, water heating, and air conditioning (with a combined price tag of $8,500 to $13,500), you just buy our one product at an estimated equipment cost of $5500 to 6500. The operating payback period would depend on what type of fuel you're switching from and how much you use it, but we estimate that to be 2-4 years.

Retrofitting depends on the size of the system that you have currently in place. If you're a homeowner, maybe you have a big furnace in the basement of your home. I know I have a big oil furnace and a big 40-gallon tank that holds all my hot water. Our system will probably be around half the size of that big water tank, about the size of a small drinking fountain that you would find in a school or park. It's about 20" in length and width and 40" in height.

HVAC contractors will need some training to commission the heat pump, but no more than what's typically required to install a new heating system that they're not familiar with. Because we're still in development, the full amount of maintenance will be required is not entirely known, but we expect it to be on par with the traditional checkup for high-efficiency systems to ensure code compliance.

Our system is not entirely renewable but it's much more environmentally friendly than what is currently out there, except solar. We use helium rather than refrigerants so the CO2 and greenhouse gas emissions are much lower than normal.

We definitely see the basis for a number of incentives, rebates, or government subsidies to subsidize the cost to the building owner when they purchase this system. We have, as part of our DOE grant, a national grid, which is one of our partners in developing the technology. The electricity grid is overburdened at this point, especially where we live on Long Island, after Hurricane Sandy, and ThermoLift is part of the peak relief.

We have a pathway to market -- it's not going to be just, "Okay, we built the machine; let's go to market." There are a lot of steps in between. Right now, we're on a second-generation system. That system goes to a national laboratory as part of our DOE funding.

After that, we'll likely build a number of third-generation systems, which will take around 6 months to a year. From there, we have to do field demonstrations, extended lifetime testing and analysis, and eventually start to introduce it to the commercial market and later the residential market.

Time To Replace The Heat Pump – Before It Broke Down Completely