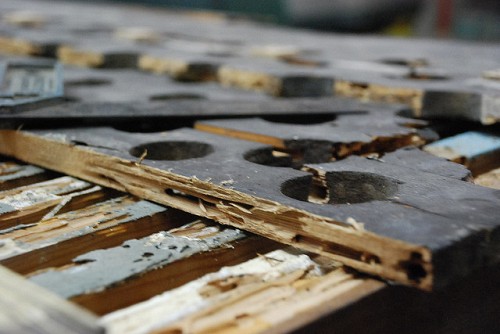 The only thing worse than finding out you have termites is thinking about how much the treatment will cost. This common expense for homeowners can rocket into the thousands for a large structure that requires tent fumigation, which can be a real blow if you didn’t plan ahead. But before you panic, there are a few things to know: there are different kinds of termites and treatment approaches, and there are some programs you can use to avoid paying a high cost for treatment if you’re willing to commit ahead of time.

Many termite infestations involve what are known as subterranean termites, especially in dry inland areas. These insects live underground around the house, and are typically treated by drilling areas around the colony and injecting chemicals into the ground. Baiting may also be used, along with laying lines of termite treatment around the house to keep them from crossing the threshold (think of it like holy water and vampires, if you will). Companies typically charge by the linear foot for this service.

Other cases involve drywood termites, with charges typically being made by the square foot. They eat wood inside the house, with the potential to cause structural damage, and are more common in coastal regions. One of the best treatment options is fumigation, which also happens to be one of the most costly, as it involves a comprehensive and aggressive attack. The structure is tented while the residents (along with pets and plants!) relocate so the company can kill the bugs.

Drywood termites can also be treated with heat or orange oil, a more environmentally-friendly alternative to fumigation. Orange oil tends not to be as effective, however, and it needs to be used by someone who’s familiar with it to ensure the termites are targeted. It’s only effective for a short period of time, so if spots are missed during the treatment, the insects will return, much like James Bond. And you really don’t want that to happen, especially if you treasure your Aston Martin in an intact condition.

Thanks to inflation, charges can change rapidly over time, and they also vary by area. To get an idea of whether you’re getting a fair quote on termites treatment cost, ask several firms for an estimate and see if there’s considerable variation between them. You can also check with a local property management or real estate company to see if there’s a service they tend to prefer, or ask friends and neighbors about how much they’ve paid for treatment.

You should be aware that costs can vary by region, and the size of your house will obviously have a large impact. If you live in an 800 square foot house, it’s much easier to handle and treat than a 2,000 square foot house, and the cost will reflect this. Environmentally-friendly or new termite treatment methods can also be more costly because of their novelty and the fact that the company may still be paying off training and equipment related to these methods. Larger companies also tend to be more expensive to work with because of their higher overhead costs.

If you’re having nightmares about termites treatment cost, there’s an option that may cheer you up: some companies offer an annual subscription plan where members pay a fee for routine inspections and receive treatments if needed as part of the plan. It’s a form of termite insurance; you may not need a treatment for five or ten years, but when you do, the cost of the treatment will be locked in at the amount stated under the plan, or the company will provide it as part of the service. During the annual inspection, the inspector can catch problems early, before significant damage occurs, and may provide advice on preventing or limiting infestations when they occur.