Taking Care Of Other People's Dogs 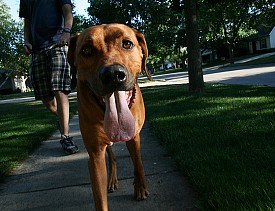 While I do not own a dog myself, I do, from time to time, take care of my best friend’s dog. And, I don’t mean to brag or anything, but I am really great at it.

The dog and I communicate with great efficiency.  While there were a few kinks to work out at first, we have come to an understanding that I will do my best to not forget to take treats with me when I bring her out to do her business (meeting with clients and visiting suppliers. Just kidding. We’re talking about pee and the other thing).

And, in return for that, she tries her very best not to BARK RIGHT IN MY FACE when she gets a little bored.  Our arrangement is mutually beneficial, and we very much enjoy each other’s company. We are also both huge fans of me replacing the lyrics to John Denver’s "Country Roads" with the words, “You’re a dog.”

The first time I took care of another person’s dog, however, I was not quite as adept. The dog, a very friendly Boston terrier named Jones, belonged to my roommate at the time. My roommate was leaving town for a week, and I offered to take care of Jones so she wouldn’t have to… put him up in a motel? As I said, I’ve never had a dog; I have no idea what the other options are. Either way, she left Jones with me. She and I both just assumed I knew how to take care of a dog. We were both wrong.

I’m pretty sure that I let too much time pass before I took Jones out on our first day alone.  As soon as we got out to the concrete stoop, he put his front legs on the second step, leaving his hind legs on the top step. Then, standing at that awkward angle, he preceded to pee directly onto the bottom of his own neck.  It was horrifying. It was, however, not as horrifying as if he had not made it out to the steps at all. At least we didn't have to foot the bill for an NYC flooring contractor to come and replace peed-on floor boards.

My biggest Jones mistake, though, was letting him run around in the park without a leash. I realized as soon as I let him go that I had no idea if I had the ability to make him come back. Would he return just because I yelled his name? I panicked and called out, “Jones!” He ran on further.

I tried to stay close to him, but the distance between us kept increasing. I continued calling his name. Still no response.

What’s important to note here is that Jones’ owner, my roommate, was a ridiculous person. She was fantastic in every way, but she was ridiculous. She would speak to Jones only in a guttural baby voice and add random syllables to words. “Jo-nuns!” she would say to the dog, “You are a baby! Covered Ha-er!” (Ha-er = hair).

So, as Jones ran even further off into the distance, it occurred to me that maybe Jones had never actually been called by his real name.  I thought about it for a second.  I then called out, “Jo-nuns!” in a baby voice. I sounded insane. Many, many people turned to look at me.

Fortunately, so did Jones. He was about 50 yards away with his ears pointed straight up. “Come here-errr!” I continued. “We will go back home and play with a bo-UN!” As people stared at me, Jones came bounding right back. We returned home without incident.

Because Jones was the first dog I ever spent significant time alone with, I’ll always think very fondly of him. I do have to admit, though, that I get a great deal more satisfaction taking care of my best friend’s dog who does not require me to yell in a baby voice in public.

Gutter Replacement By A Contractor Who Cares About Customer Satisfaction