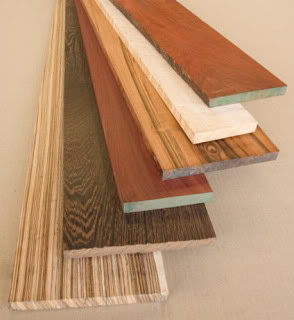 Softwoods are not only eco-friendly, they are also cheaper than hardwoods! Softwood, the source of about 80% of the world's production of timber, is less expensive than hardwoods partly because it comes from cone-bearing (coniferous) trees, which grow fast and straight. Most commonly used for home construction, softwood is sold in standard Despite its name, softwood is not necessarily softer than hardwood and in fact there is quite a variation in hardness among the different softwoods and hardwoods.

Cedar - Cedar, a reddish wood known for its aromatic smell, is often used to line bedroom closets as it repels insects such as moths which feed on fabrics. Cedar offers other great qualities such as decay resistance and a pleasingly uniform texture. In the home improvement and construction field, cedar is also used for siding and roofing shingles.

Fir - Fir is a soft, reddish brown tinted, uniform-textured wood, which absorbs finish products well. It's most commonly used in home building for trim and other detail work, such as moldings, windows, doors, and veneers.

Hemlock - Hemlock is coarse, rough, soft wood with open grain. It has low decay resistance and does not paint as well as some other wood types,; however its advantages are light weight and easy workability. For these reasons, it is useful in construction mainly for planks, boards, and sub-flooring.

Pine - Pine is yellowish in color with a consistent texture. It's popular for home construction because it does not tend to shrink, swell, or warp. Pine comes in several varieties, including Ponderosa, Sugar, White, and Yellow and is commonly used for lumber, trimwork, paneling and flooring in low traffic areas.

Redwood - Redwood is a deep rich reddish brown. An average-priced softwood choice, it is frequently chosen for outdoor projects such as decks, lawn furniture, fences, planters, and siding due to its resistance to moisture. Redwood also has a natural resistance to decay.

Consult a reliable contractor about the best type of softwood from your home improvement project.