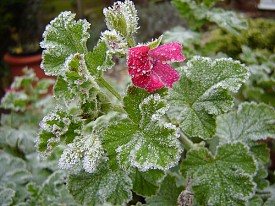 If you've been living through the polar vortex, or just plain cold temperatures, you may have been worried about a lot of things, including your garden. While your plants took night after night of cold temperatures, your nails might have ended up bitten to the quick as you waited to see what happened. Even with frost protection like frost sheets, cloches, and a nice layer of mulch to insulate roots, extreme temperatures can be too much for many plants to handle.

Does your garden have some brown, drooping, miserable specimens in it? Those frost-bitten residents of the garden may actually be capable of recovery, so don't start playing a funeral dirge and ripping them out just yet. Instead, let's talk about how to help plants recover from frost bite.

Brown, Droopy Foliage Does NOT Mean the Whole Plant is Dead

First of all: that brown, drooping foliage? It's dead. But you probably already knew that. The delicate capillaries inside the leaves burst when they were filled with steadily expanding frozen water, and they're done for. However, if your plant has a woody stem, it's entirely possible that the stem (and root system) are still in good shape, and that the plant can recover and go on to produce new foliage once you've trimmed the dead material away.

You need to know, however, when to trim away the dead parts of your plants, how to tell if they're still alive somewhere under all that depressing debris, and how to care for them as they recover.

Patience is key when it comes to managing plants that have been shocked by frost. While you might want to trim away all that gross brown stuff immediately to cut back and find the living part of the plant, that's a bad idea. Pruning stimulates growth, and if a plant starts producing new growth before the last danger of frost is past, that tender new growth is simply going to get frozen again. Meanwhile, the plant will have dedicated substantial stored energy to producing that growth, making it less able to cope with the sudden freeze.

Avoid fertilizing, for the same reason.

Baby Your Plant Till after the Last Chance of Frost

Instead, you need to wait. Cover your plant with woven fabrics when frost is in the forecast, water it like you normally would, and wait until the last chance of frost is completely over. As the weather transitions into spring, you may feel your fingers itching, but keep waiting: make sure you wait until after the last predicted frost date before you pick up those pruning shears.

When you finally do prune, be conservative. We know ... that dead growth looks awful! But here's the thing: pruning stresses out plants. (That's precisely why we do it, because it lights a fire under their butts, as it were, and promotes the development of new branches and leaves.) When a plant is healthy and fertilized, that's good, because it will develop strong, even, healthy growth. When a plant is frost-bitten and brow-beaten, the stress of putting out new growth is often too much for it to handle.

Waiting to prune has another benefit: You can see precisely where the new growth emerges, so you know which parts of the plant are dead, and which parts made it through the frost. You can clip back to just above the living parts to get rid of the worst part of the frost damage without disrupting the plant's growth. Plan on leaving the plant more or less alone to recover. Keep it watered, sheltered, and cared-for, but avoid excessive pruning or fertilizing (some gardeners prefer to wait until next fall to fertilize again).

Think of it this way: when thawing frost-bitten fingers, you don't dunk someone's hand into a bowl of boiling water. Instead you move slowly and steadily to restore circulation without damaging the hand. The same holds true for plants, which can be further traumatized if you're too enthusiastic in your attentions.

Getting antsy while you wait? Redirect your focus away from the frost-bitten plants. Talk to an experienced local landscaper and plan your plantings -- and maybe some new hardscape -- for spring. Before you know it, the weather will be warming up, and your garden will be back on track.