What to Do About a Sagging Ceiling 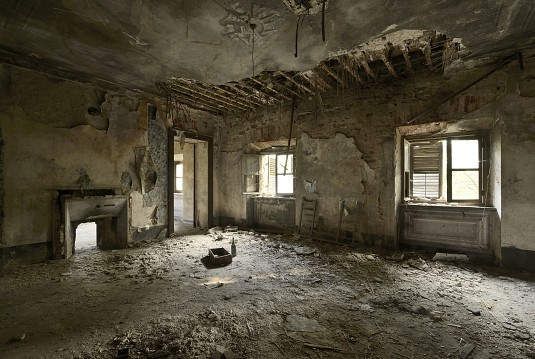 Look up. Is your ceiling sagging? A sagging ceiling is on its way toward collapsing -- deal with it before it does. If the ceiling comes down, it can cause serious injury and even death, so the cost of replacing the ceiling and paying for new furniture may turn out to be the least of your issues. If you have a sagging ceiling, get in touch with a licensed contractor as soon as possible.

While you're waiting for the contractor to arrive, let's figure out what caused your ceiling to sag in the first place.

At the time the house was built, if the land wasn't graded properly or the foundation was poorly constructed, the long term effects that can have on the house can be devastating. Other factors, like whether the soil was too wet or too sandy, also play a role. Basically, anything that causes the ground to expand or contract will burden the foundation. Over time, a house will naturally "settle" into the earth it was built on and the foundation may shift or sink. This can cause cracks to appear in your walls, and, among other things, your ceilings may start sagging as well -- especially if the original builder did a shoddy job.

Take a walk around your basement. If you see cracks, dampness, or bugs, your foundation is the issue and you should talk to a professional about it.

If the ceiling is sagging and there aren't any telltale stains that would suggest water damage, then there's a good chance the drywall wasn't installed properly. Most drywall ceilings require 4" screws spaced 12" apart from each other. The builder may have gotten lazy and cut corners. If he skimped on the screws and spaced them too far apart, the ceiling will sag.

Another idea is that he used the wrong drywall. While 1/2" thick drywall is the most popular size, it's very light (one of the reasons for its popularity) and isn't as sturdy as, say, 5/8" thick drywall. 1/2" drywall is more likely to sag, especially if there's a lot of space between the support beams. Most professionals recommend using 5/8" drywall for ceilings because it's a lot stronger.

Have a contractor come in (a quality one this time!) to see what he has to say. He'll either be able to reinforce the existing drywall, or he may decide you need the drywall replaced altogether.

A undetected water leak can cause all sorts of household problems. For ceilings in particular, water can accumulate inside the ceiling, weakening the drywall or plaster. If enough water is allowed to build up, the ceiling will sag and collapse. Water can also cause support beams to warp and rot which will lead to eventual ceiling collapse as well.

Once you've diagnosed the root of your sagging ceiling as a water leak, call a plumber and make sure your plumbing is fixed before you begin repairing your ceiling.

Isoptera is the scientific name for termites. Hopefully, the word "Isoptera" strikes less fear in the hearts of homeowners than the word "termites" does. Termites look like white ants and their favorite food is wood. If your home is infested with termites, God forbid, there's a good chance they've already caused lots of damage to the wooden support beams in your ceilings and throughout your house.

If you suspect you may be dealing with a termite issue, call an exterminator immediately.