Recovering from Flooding? Watch Out in the Garden 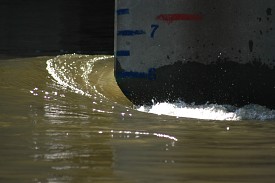 With terrible floods ongoing in several regions of the world at the moment, including in Colorado and Russia, pictures of partially-drowned homes and cars, soggy gardens, and flood refugees seem to be filling the news. Flooding can be awful for a community, requiring substantial funds for recovery as people hire cleaning services and remodeling companies to make their homes habitable again, work to repair infrastructure, and try to prevent flooding on such a scale again. Unfortunately, due to shifts in global weather patterns, flooding is likely to be on the increase.

One aspect of flood recovery often doesn't make the headlines, and it's important for you to be aware of it if you're recovering from a flood or you're in an area where flooding is common: your vegetable garden may not be safe after flooding.

While you may have heard of ruined crops post-flooding (one reason floods are so devastating), after your garden dries out from a flood, you might be tempted to salvage and eat the veggies that look like they've handled the weather okay. Even though they may look fine, without signs of mold, rot, mildew, and other problems, they could be carrying a hidden load of pathogens that you most definitely do not want to consume, along with chemicals and toxins.

Flooding, as you may be aware, often involves very dirty water. As floodwaters rise, they can carry toxins from the soil along with ruptured pipelines, dumps, and storage facilities. They lift oil from the streets, and as they swirl through communities, they pick up a nasty load of things like agricultural chemicals, paint, and more. Furthermore, flooding is often accompanied by rupture and overflow of sewer lines, which means that water also carries raw sewage with live infectious organisms.

When that water rushes through your garden, it deposits a load of harmful material on your plants and in your garden soil. Those Denver flower gardens should be okay, but vegetable plots are a whole different kettle of fish. It can't be washed away, and if you eat those crops, you could get very sick, especially if you have a compromised immune system. To prevent illness post-flooding, here are a few tips:

*Don't eat anything raw. If soft fruits and leafy veggies can be cooked, make sure to cook them well (in the case of root vegetables, sanitize them in a mild bleach solution, peel them, and cook them). On the other hand, thin-skinned veggies like peas and tomatoes should be discarded.

*If a plant is growing but hasn't produced yet, you should be aware that it can be contaminated after the flood by splashback from the soil. Follow the precautions above before eating anything.

*For seeds that haven't sprouted yet, the same cautions apply.

*Soil should be allowed to rest for 90 days before replanting, to allow any hazardous materials present to break down.

*Make sure to protect yourself, too: wash your hands throughly after working in the garden, and maintain separate clothes and shoes for working in the garden during flood recovery. Keep young children, pets, and anyone with immunocompromise (including pregnant women and people with chronic illnesses) out of the garden until it's safe.