Raising Goats in the City 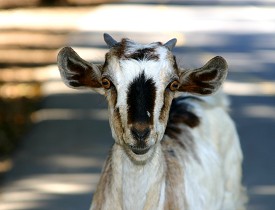 Urban homesteading has become a hot topic in recent years. Some pioneering urban homesteaders are pushing the envelope of what's possible in an urban backyard and have advanced from veggies and chickens to keeping small herds of goats.

The appeal of keeping goats is manifold: fresh milk everyday from humanely treated animals, less reliance on the industrial food system and the companionship of furry, appreciative pets (dog owners know that feeling). Many people reading this are probably thinking, “Sure I'd love to have goats and fresh milk, but I'm not planning on moving to the country anytime soon.”

At first it does sound a little crazy to keep goats in an urban setting. What about the smells? How much land does it really take? Could I possibly do it?

Meet Kitty Sharkey, owner of Havenscourt Homestead in Oakland, CA. The homestead started out as an average 4,000 square foot lot in an average neighborhood, but over the last few years Kitty converted the yard around the house into a fecund farm and garden worthy of Charlotte's Web. At the moment, Kitty has five adult Nigerian dwarf goats and three kids (baby goats) which live in her 900 square foot backyard “barnyard.” (According to Urban Homesteading by Rachel Kaplan, two goats can be kept in 150 square feet of outdoor space, assuming they get walked around the neighborhood regularly.) Kitty's goats share the space with chickens, rabbits, quail and bees.

Lest you think it is a dirty, smelly mess, Kitty has been checked by vector control and passed with flying colors. “The vector control inspector told me that if half the homesteads he visited took care of their operations half as well as I do, he would be out of a job.” Indeed, Kitty's yard is a paradigm of efficiency and cleanliness in small spaces. So much so that Kitty was selected as one of two technical advisers for the City of Oakland for its development of best practices for urban homestead activities.

Kitty has kept goats for about two and a half years now. Like more and more people, she was jaded by a duplicitous industrial food system and wanted to be in control of her food sources. “I want to know where my food comes from and I don't want to support factory farms.” Now Kitty knows exactly where her food comes from — she milks her own goats and makes her own cheeses. “Raw milk is extremely nutritious and good for the digestive tract. I know that my milk comes from animals that are happy and live normal lives.”

The diminutive size of the dwarf goats fits them perfectly in Kitty's backyard, although she advises that larger goats would work too. “La manchas, for instance, produce more milk than Nigerian dwarf and would be good for a four member family.” But for now Kitty is the only human member of Havenscourt Homestead and so the pygmies produce the right amount of milk for her.

“Nigerian dwarves have a normal lactation cycle of 305 days, 10 months. You can milk them longer but milk production peaks at 70 or 80 days, then starts to taper out,” Kitty explains. “The gestation period is five months. You can milk them for the first three months of pregnancy. Most people breed their goats once a year and milk for 10 months, while the other two months the goat is resting and preparing for birth. Now since I have four does (female goats), I will breed two in the fall and two in spring in order to have milk year-round.”

Challenges of Keeping Goats at Home

Many challenges come along with keeping goats, whether or not it's in an urban setting. Like any pet, they cannot be left alone for any significant period of time. When in milk, goats must be milked twice a day, every day. Then there is the manure to deal with... but it can all be done, and it can be enjoyable.

Kitty uses the “manure pack” system of bedding management in the goats' shed. Instead of cleaning it out regularly, the old bedding is aerated and layered over with new bedding. This causes fermentation to occur which has three main benefits: It prevents undesirable odors, it radiates heat which the goats enjoy in cool weather and at night, and it encourages the breakdown of the bedding material for use in the garden. “It just smells like hay,” Kitty shrugs.

As for the yard, Kitty scoops up regularly and composts the goats' manure. “But,” she adds, “the best part of manure management in the yard is running the chickens with the goats. I call them the clean up crew. The chicken clean up crew. They scratch the goat poop into dirt and eat fly larvae and keep the fly population down.”

Goats Must Be Mated

Another challenge is that goats, like all other mammals, need to become pregnant and give birth in order to produce milk. This means that producing milk involves finding a stud, mating your goats, and dealing with the babies when they're born. Increasing goat populations in an urban setting can be tricky to manage. The babies can be sold, raised for meat, or kept as part of the herd.

Goats generally eat grass in the summer, supplemented by hay and nutrient-dense grain feed in winter or as needed. Kitty found access to proper food to be a challenge.“It depends on where you live. In the Bay Area some people have to drive a half hour or 45 minutes to get food. We put together a community buying group so now I only have to drive ten minutes.”

Advice for Those Considering Goats

“Before you get into it, do lots of research to decide whether they're for you,” Kitty advises. “Don't only read books and websites—visit people who are doing it, talk to them about the issues involved, what to feed, how to control manure and flies. You need to know what you're getting into. Meeting people who own goats also helps build a network of support so when you get started you'll have people to go to for advice. And buy good quality stock with papers, not just cheap goats form Craigslist. If not, it's going to be hard to sell the babies.”

And find a pro to build a good fence around your urban goat pen ... er, backyard.